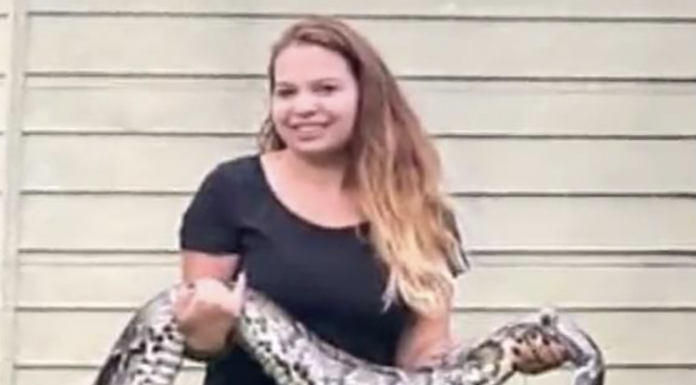 While the average Burmese python found in the Everglades ranges from 8 to 10 feet, this “behemoth of a snake” is a whopping 18 feet and 9 inches (and a hefty 104 pounds!).

“The removal of this behemoth Burmese python is a triumph for our native wildlife and habitats,” FWC Commissioner Rodney Barreto said in a press release.

With South Florida Water Management District’s Python Elimination Program, volunteer snake trappers carefully search for the invasive species that has been threatening native wildlife in the swampy area for years.

The snakes are said to be one of the largest on the planet, having the ability to grow up to 20 feet long.

The state has made it a priority to humanely remove them from the national park in an effort to preserve the delicate Everglades ecosystem, as the pythons have taken a liking to the area’s wildlife, including birds, small critters, and even alligators.

Trappers Ryan Ausburn and Kevin Pavlidis, who both caught the colossal giant, are members with the FWC’s and SFWMD’s python elimination programs … Read more.

Working together as part of the joint python elimination program under the direction of Florida Governor Ron DeSantis, Ryan Ausburn and Kevin Pavlidis removed the 18 foot, 9 inch snake on Oct. 2 along the L-28 Tieback Canal about 35 miles west of Miami.

So far, hunters for the expanded program run by the two agencies have removed more than 5,000 invasive pythons from South Florida’s Everglades ecosystem.

“Under Governor DeSantis, the South Florida Water Management District and Florida Fish and Wildlife Conservation Commission expanded our python removal efforts. Today’s record breaking capture shows that our increased efforts are working to get harmful pythons out of the precious Everglades ecosystem,.

“Together with our partners and the public’s help, we can restore the Everglades and combat the harmful pythons that hurt Florida’s native wildlife.”

“The removal of this behemoth Burmese python is a triumph for our native wildlife and habitats.

“It’s a great example of the partnership between the FWC and the South Florida Water Management District, working under the leadership of Gov. Ron DeSantis, toward our goal of removing these nonnative predators.”

The public can help control non-native invasive wildlife by reporting sightings to the FWC’s Exotic Species Hotline at 888-IveGot1 (888-483-4681), online at IveGot1.org or by using the free smartphone app IVEGOT1.

If possible, take a picture and note the exact location of the sighting. Python Action Team and Python Elimination Program members respond to reports of large constrictors and other priority species to remove these harmful invaders from the wild.

Burmese pythons became established in Florida as a result of escaped or released pets. It is illegal to release non-native species into the wild and can negatively impact Florida’s native wildlife and habitat. Don’t let it loose! The FWC’s Exotic Pet Amnesty Program allows pet owners to surrender nonnative or exotic pets without penalty. Visit MyFWC.com/PetAmnesty for more information.

To learn more about the FWC’s Python Action Team and the SFWMD’s Python Elimination Program, visit MyFWC.com/Python and SFWMD.gov/Python.