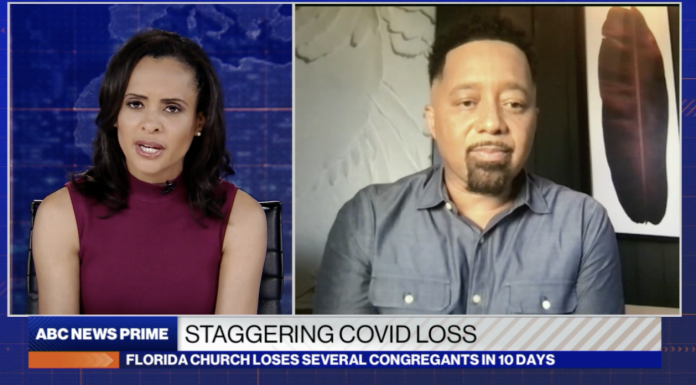 "I believe that the vaccination is a part of God's help for all of us."

ABC News – Pastor George Davis said it’s always difficult to go through the grieving process with families in his church. But when seven people died in a two-week span from COVID-19, it presented an unprecedented challenge.

He told ABC News’ Linsey Davis four of his late congregants were under the age of 35, and a number who died were unvaccinated. Davis said:

“The young man who was 24, I’ve known him since he was a toddler.

“Each of them were otherwise healthy. There’s no reason to expect they would’ve been passing away. None of them had cancer or any other disease that would’ve taken them out any time soon, that we were aware of. So it’s very frustrating.”

It’s been even more frustrating, he said, considering, “I’ve done everything I can to promote vaccination.” Davis, his wife and three kids were all vaccinated when it was made available to them, he said.

In March, Davis’ Impact Church in Jacksonville, Florida, hosted their first major vaccination event. Their building sits a few hundred yards from a space rented out by the state health department, but at the time very few people were getting vaccinated at the state’s site. He said:

“I put forth the premise that, ‘Hey, people trust in this community, trust their church probably more than they would a government medical site, vaccination site.’

“It ended up being 800 people that got vaccinated 200 yards from an existing site. But they were coming to a trusted location.”

Months later, after the fourth unvaccinated person in his congregation died, he knew he needed to do something more:

“We organized another vaccination event this past Sunday. … Last time we did it on a Saturday, I said, this time we’re going to do it on a Sunday. That way I’m going to make it as easy as possible.”

“We do it on a Sunday after all three of our services. If you want, you can go right over to a room across the hall and be vaccinated on site. It turned out beautifully” … READ MORE.