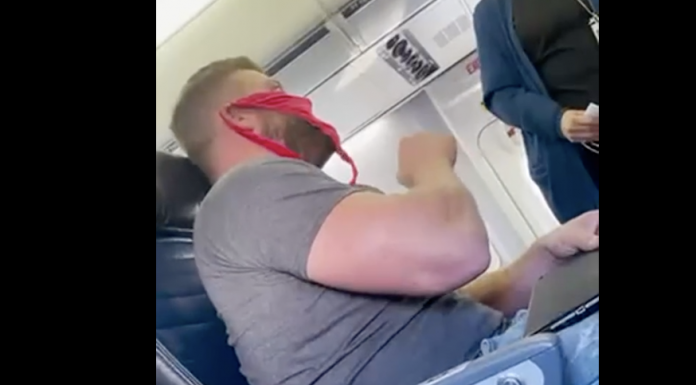 This passenger may have thought it clever to place panties over his nose rather than wear a proper face mask, but airline employees were clearly not amused.

TAMPA, Fla. (WFLA) – A Florida man has been banned from flying with United Airlines after attempting to wear thong underwear over his face instead of a mask.

The passenger now tells WFLA he’s attempted this same stunt about 20 times before.

Video of the incident shows two flight attendants talking to Adam Jenne, who had been wearing the garment to cover his nose and mouth while he waited for his flight to take off from Fort Lauderdale to Washington, D.C.

One of the flight attendants can be heard telling Jenne he’s “not in mask compliance.”

“You’re going to have to come off the airplane. We’re not going to let you travel,” the flight attendant tells Jenne.

“The customer clearly wasn’t in compliance with the federal mask mandate … This customer has been banned from traveling with United.” – United statement

In a statement obtained by Nexstar, United Airlines confirmed that Jenne is not welcome to fly with the carrier.

Jenne did not disclose his vaccination status in the phone interview with WFLA. “It’s none of your d— business,” he said.

“If you traveled last year, this year is going to feel quite a bit busier.”

Travel tips before you take to the skies

MOLINE, Ill. — If you are someone traveling for the holidays this year, you are not alone. In fact, AAA estimates more than 109 million Americans will travel for the holidays.

“Americans who had to cancel getaways and get-togethers last year because of the pandemic are making up for lost time this holiday season. ” AAA said in their holiday travel forecast. That’s expected to be a 34% increase in travel over 2020.

The Quad Cities International Airport saw over Thanksgiving saw a 94% recovery of outbound passengers. The national total was about 89% recovered for the same time period of the Tuesday – Sunday of Thanksgiving. These numbers are expected to continue to increase.

“If you did travel last year, this year is going to feel quite a bit busier.”

“If you haven’t traveled since 2019, and you’re expected a different experience, the crowds will feel the same.” Davis says there are still some things to keep in mind.

“For example, having to wear a mask in all US airports. There is COVID-19 restrictions, if you’re traveling internationally or specific states … ” READ MORE.