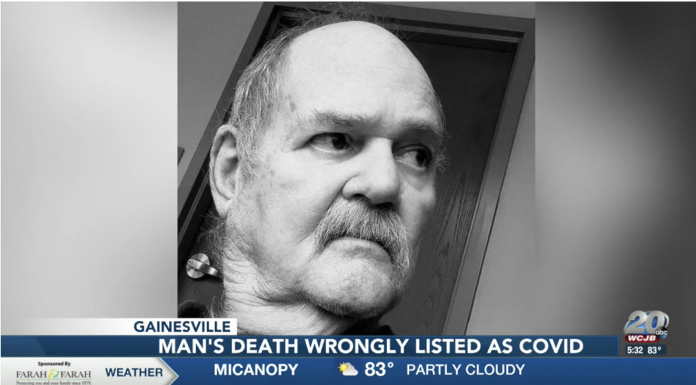 GAINESVILLE, Fla. (WCJB) – A family in North Central Florida is demanding answers after their father’s passing was falsely labeled as a COVID-19 death.

This comes after he died just a few weeks ago at UF Health Shands.

Bill Horne owned a photography studio in Gainesville for over 50 years, his daughter Pam said.

But over the past few years, her father’s health began to deteriorate. Last October, he suffered a stroke just two weeks after being diagnosed with stage four prostate cancer.

Pam and her brother Randy were contacted by UF Health Shands on September 2nd.

“They said listen,” Randy said, “we have your father here … you probably have to come to Gainesville to say your goodbyes.”

Pam and Randy say more medical issues began to surface and Bill ended up being put on life support. The family was told he would not survive. They were left with one option.

“As soon as they took the respirator out, he was gone,” Pam said.

What followed after saying their goodbyes was something they say they remember vividly.

“I had specifically asked the ICU nurse,” Pam said, “I said ‘was daddy tested for COVID?’ and she said ‘oh of course. If he had tested positive, he wouldn’t be here’.”

A few days later, after an autopsy was conducted, the family received the death certificate. Pam opened it on the day of the funeral.

“I looked and it said: Cause Of Death: COVID-19 pneumonia … and I just screamed.”