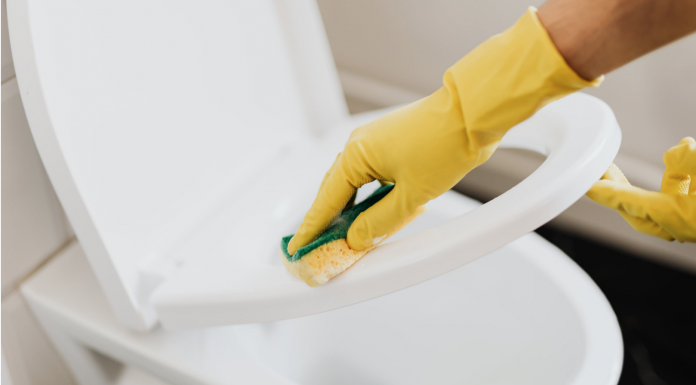 “Warm, moist air from the bathroom of a SARS patient excreting ‘extremely high concentrations’ of virus in feces and urine established a plume in an air shaft that spread the airborne virus to other apartments, research showed.”

PLUS: Woman may have gotten COVID-19 from airplane bathroom

BLOOMBERG – The discovery of coronavirus in the bathroom of an unoccupied apartment in Guangzhou, China, suggests the airborne pathogen may have wafted upwards through drain pipes, an echo of a large SARS outbreak in Hong Kong 17 years ago.

Traces of SARS-CoV-2 were detected in February on the sink, faucet and shower handle of a long-vacant apartment, researchers at the Chinese Center for Disease Control and Prevention said in a study published this month in Environment International.

The contaminated bathroom was directly above the home of five people confirmed a week earlier to have COVID-19.

The scientists conducted “an on-site tracer simulation experiment” to see whether the virus could be spread through waste pipes via tiny airborne particles that can be created by the force of a toilet flush.

They found such particles, called aerosols, in bathrooms 10 and 12 levels above the COVID-19 cases.

Two cases were confirmed on each of those floors in early February, raising concern that SARS-CoV-2-laden particles from stool had drifted into their homes via plumbing.

The new report is reminiscent of a case at Hong Kong’s Amoy Gardens private housing estate almost two decades ago, when 329 residents caught severe acute respiratory syndrome, or SARS, in part because of faulty sewage pipelines.

Forty-two residents died, making it the most devastating community outbreak of SARS, which is also caused by a coronavirus.

“Although transmission via the shared elevator cannot be excluded, this event is consistent with the findings of the Amoy Gardens SARS outbreak in Hong Kong in 2003,” Song Tang, a scientist with the China CDC Key Laboratory of Environment and Population Health, and colleagues wrote in the study, which cited unpublished data from the health agency.

Apartments in multistory buildings may be linked via a shared wastewater system … Read more.

IN CASE YOU MISSED IT: Bill Gates Faces New Questions On Virus Role

Woman may have gotten COVID-19 from airplane bathroom

USA Today – Researchers say a woman who was evacuated from Italy in March may have been infected by the coronavirus in an airplane bathroom on her flight back to South Korea.

The study comprised of roughly 300 passengers who underwent interviews, physical exams and temperature screenings before they were allowed on the aircraft, according to an early edition of an article scheduled to be published by the U.S. Centers for Disease Control and Prevention.

Six passengers who had shown no symptoms before the flight tested positive for COVID-19 after landing. Eight days later, a 28-year-old woman tested positive after developing a cough, runny nose and sore muscles … Read more.