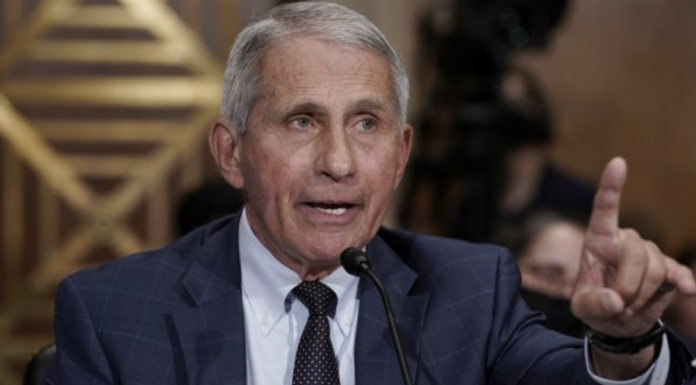 (Mark Pellin, Headline USA) It had been nearly a month since Covid Czar Anthony Fauci emerged from the isolation bunker that housed President Joe Biden in protected solitude during his 2020 campaign, and when the White House released “The Science” this week, Fauci pounced on the chance to resume his role as the nation’s nanny-in-chief.

Apparently alarmed that during his weeks-long absence, an overwhelming majority of the country had the temerity to move past mask mandates and vax passports, Fauci seized recent reports that indicated the possibility of coronavirus comeback and waved them like a wand.

“We need to be flexible,” Fauci said in his return to primetime.

“And if in fact we do see a turnaround and a resurgence, we have to be able to pivot and go back to any degree of mitigation that is commensurate with what the situation is,” Fauci told CNN’s Jake Tapper.

Any degree of mitigation, of course, including a return to forced masking and COVID restrictions.

“So we can’t just say we’re done, now we’re going to move on. We’ve got to be able to be flexible, because we’re dealing with a dynamic situation,” Fauci said.

“Hopefully, the cases will continue to come down as the weather gets warmer.”

Or not; Fauci and the Science Sanctum are already showcasing a surge overseas of a new Omicron sub-variant, tagged BA.2, which is notably more transmissible than the original omicron strain and is already overtaking it, CNBC reported.

The U.K. has seen a major jump in COVID cases over the last several weeks, while Germany is racking up record highs for reported cases with more than 250,000 daily. Case counts are likewise proliferating across France, Switzerland, Italy and the Netherlands.

Scientists have noted that the U.K. and the rest of Europe have served as prime leading indicators for what will follow overseas and what could be heading to America.

While U.S. case counts have eased significantly, the new BA.2 variant already accounts for about 11 percent of the total and with its potent transmissibility could spike in short order.

Fauci, in another media appearance this week, predicted that a significant surge in COVID cases is “imminent,” and told a reporter that he “expects [BA.2] will become the dominant strain in the US over the next few weeks and erase many of the gains we’ve fought for.”

For Fauci, that means being flexible enough to accept the need to resume mandatory masking and spacing restrictions in public areas.

That could be a tough sell, however, to a public embracing a return to normalcy and its trust in hack political science near rock bottom.

Fauci, along with CDC boss Rochelle Walensky and the rest of the Science Sanctum, will need to sufficiently stoke the fear factor if they want to resume their dictums from on high, and they’re not above peddling a load of sh*! to manufacture the potential for doom.

No, really; not Fauci’s typical type, but excrement none the less.

COVID cases are already rising, according to an analysis of a wastewater network that monitors for coronavirus trends, according to Bloomberg.

A high concentration of COVID indicators, shed from virus carriers into toilets, showers and sinks, in a wastewater sample can indicate a rising number of infections, often days before those cases show up in tests.

In wastewater sampling sites across the country, data from the Centers for Disease Control and Prevention show a majority of sites are showing an increase of COVID cases, reported The Hill.

Sixty-two of those sites showed an increase of 1,000 percent or more, while 48 increased anywhere from 100 percent to 999 percent.

The wastewater trends are cause for “grave concern,” Dr. Sadiya Khan, an epidemiologist at the Northwestern University Feinberg School of Medicine, told NBC News.

“This increase is not a surprise and is of grave concern given the loosening of restrictions for activities and masking in schools and communities,” Khan said.

The solution, according to Fauci, is eternal vigilance with a government truncheon.

“We have to be careful that if we do see a surge as a result of that we’re flexible enough to reinstitute the kinds of interventions that could be necessary to stop an additional surge,” Fauci warned.