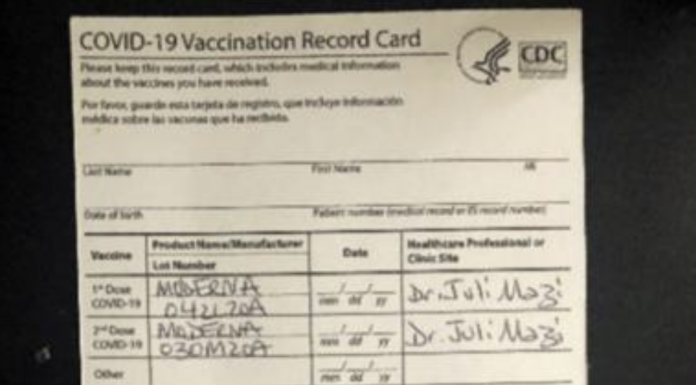 A Reddit user commented, "I need one, too, for college. I refuse to be a guinea pig."

SAN LUIS OBISPO, Calif. (AP) — As the delta variant of the coronavirus sweeps across the United States, a growing number of colleges and universities are requiring proof of COVID-19 vaccination for students to attend in-person classes.

But the new mandate has opened the door for those opposed to getting the vaccine to cheat the system, according to interviews with students, education and law enforcement officials.

Both faculty and students at dozens of schools interviewed by The Associated Press say they are concerned about how easy it is to get fake vaccine cards.

Across the internet, a cottage industry has sprung up to accommodate people who say they won’t get vaccinated for either personal or religious reasons.

A user on the encrypted messaging app, Telegram, offers “COVID-19 Vaccine Cards Certificates,” for as much as $200 apiece.

An increasing number of inquiries to these sites and similar ones appear to be from those who are trying to get fake vaccination cards for college.

A Reddit user commented on a thread about falsifying COVID-19 vaccination cards, saying, in part, “I need one, too, for college. I refuse to be a guinea pig.”

On Twitter, one user with more than 70,000 followers tweeted, “My daughter bought 2 fake ID’s online for $50 while in college. Shipped from China. Anyone have the link for vaccine cards?”

According to a tally by The Chronicle of Higher Education, at least 675 colleges and universities now require proof of COVID-19 inoculations. The process to confirm vaccination at many schools can be as simple as uploading a picture of the vaccine card to the student’s portal.

In Nashville, Vanderbilt University places a hold on a student’s course registration until their vaccine record has been verified unless they have an approved medical accommodation or religious exemption.

“The United States, unlike most countries which have electronic systems in place, is basing its vaccination on a flimsy paper card.”

The University of Michigan says it has a system in place to confirm employee and student vaccinations. A spokesman for the college told the AP the school has not encountered any problems so far with students forging their COVID-19 vaccination record cards.

But Benjamin Mason Meier, a global health policy professor at the University of North Carolina at Chapel Hill, questions how institutions can verify those records.

“The United States, unlike most countries which have electronic systems in place, is basing its vaccination on a flimsy paper card,” he said.

Meier tweeted last week that he spoke with several students who were worried about the accessibility of fraudulent vaccine cards and that they knew a fellow student who had submitted one to the university.

“There need to be policies in place for accountability to make sure that every student is operating in the collective interest of the entire campus,” he said.

“The development of a reliable national digital vaccine passport app is very important for the sake of all the organizations and businesses that want to require proof of vaccination.”

In a statement to the AP, UNC said it conducts periodic verification of documents and that lying about vaccination status or falsifying documents is a violation of the university’s

COVID-19 community standards and may result in disciplinary action.

“It’s important to note that UNC-Chapel Hill has not found any instances of a student uploading a fake vaccine card. Those claims are simply hearsay at this point,” the school said.

But other university staff and faculty have expressed their concern over the alleged forgery of vaccine cards. Rebecca Williams, a research associate at UNC’s Lineberger Comprehensive Cancer Center and Center for Health Promotion and Disease Prevention, said while she is concerned by these claims, she isn’t surprised.

“This is why I think the development of a reliable national digital vaccine passport app is very important for the sake of all the organizations and businesses that want to require proof of vaccination for employees, students, or business patrons,” Williams said.

The AP spoke with several students across the country who did not want to be identified but said they were aware of attempts to obtain fake cards.

Some school officials acknowledge that a foolproof system is impossible.

“As with anything that potentially requires a certification, there is the possibility for an individual to falsify documentation,” said Michael Uhlenkamp, a spokesman for the chancellor’s office at California State University. The school system, which is the largest in the nation, oversees about 486,000 students each year on 23 campuses.

Dr. Sarah Van Orman, the chief health officer at the University of Southern California and COVID-19 task force member for the American College Health Association, said college campuses are especially challenging environments to control the spread of COVID-19 since tens of thousands of students move into campus from all over the world.

But even if students falsify their vaccination status, it may have limited impact, she said.
“I think that the numbers of students who would do that would be so very small that it wouldn’t affect our kind of ability to get good community immunity,” Orman said.

In March, the concern over fake COVID-19 vaccination cards prompted the FBI to issue a joint statement with the U.S. Department of Health and Human Services urging people not to buy, create or sell fabricated vaccine cards.

The unauthorized use of the seal of an official government agency such as HHS or the Centers for Disease Control and Prevention is a federal crime that carries a possible fine and a maximum of five years in prison.

In April, a bipartisan coalition of 47 state attorneys general sent a letter to the CEOs of Twitter, Shopify and eBay to take down ads or links selling the bogus cards.
Many of the sites have blacklisted keywords related to fake cards, but places to buy the documents are still popping up on messaging apps, chat forums and the dark web.

Sellers on websites such as Counterfeit Center, Jimmy Black Market, and Buy Express Documents list COVID-19 vaccine cards, certificates and passports for sale, some costing €400 Euros or about $473.49.

An advertisement on the website Buy Real Fake Passport reads vendors can produce fake vaccination cards by the thousands, if not tens of thousands, based on the demand.

“It is hiding under our noses. If you want it, you can find it out,” said Saoud Khalifah, founder and CEO of scam-detecting software Fakespot. “If we are seeing signs where things like Lollapalooza and other festivals are getting fake cards to gain entrance, the trend is just going to continue into these universities.”

In July, the U.S. Department of Justice announced its first federal criminal fraud prosecution involving a fake COVID-19 immunization and vaccination card scheme. Juli A. Mazi, 41, a naturopathic physician in Napa, California, was arrested and charged with one count of wire fraud and one count of false statements related to health care matters.

Court documents allege she sold fake vaccination cards to customers that appeared to show that they had received Moderna vaccines.

In some cases, the documents show Mazi herself filled out the cards, writing her own name, and purported Moderna “lot numbers” for a vaccine she had not in fact administered.

For other customers, she provided blank CDC COVID-19 vaccination record cards and told each customer to write that she had administered a Moderna vaccine with a specified lot number.

Requiring vaccinations to attend class at colleges and universities has become a contentious political issue in some states. Public colleges in at least 13 states including Ohio, Utah, Tennessee and Florida cannot legally require COVID-19 vaccinations due to state legislation, but private institutions in those same states can.

Among the states introducing and passing bills barring educational institutions from mandating COVID-19 vaccines, infringement on individual rights or liberties is often cited as the main concern.

But according to a statement released by the American College Health Association and other educational organizations, these restrictions impede on universities’ abilities to operate fully and safely.

“The science of good public health has gotten lost in some of the decisions that have been made in some places,” Orman said. “It has not always been held up by our political leaders.”

Some college students have taken to social media platforms like Twitter and TikTok to voice their outrage over other students possessing fraudulent vaccine cards.

Maliha Reza, an electrical engineering student at Pennsylvania State University, said it is mind-boggling that students would pay for fake vaccination cards when they could get the COVID-19 vaccine at no cost.

“I’m angry about that, like there is more anger than I could describe right now,” Reza said.

“It’s dumb considering the vaccine is free and it is accessible across the country.”
___
Roselyn Romero is an intern on the Associated Press Global Investigative team. The internship is funded by the Ida B. Wells Society for Investigative Reporting. Follow Romero at https://www.twitter.com/roselyn_romero
___
Contact AP’s global investigative team at [email protected] or https://www.ap.org/tips/