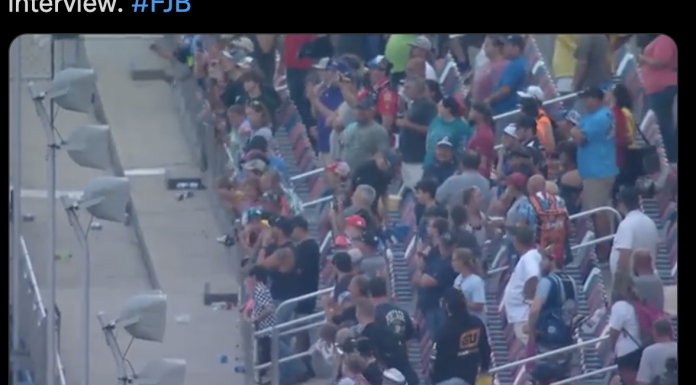 After Brown told a reporter during a post-race interview that his victory was a “dream come true,” the crowd began to loudly shout in unison their displeasure with the president.

NASCAR initially posted video of the interview with the chant but later deleted the tweet.

The “F— Joe Biden” chant has surfaced at sporting events across the United States — mainly in southern states.

The vocal protest has been especially popular at college football games where tens of thousands of fans have been packing stadiums in defiance of the Biden administration’s strict coronavirus guidelines … READ MORE.

… It is the latest case where anti-Biden chants have been heard at sporting events across the country.

The chant was also heard at the Ryder Cup this week, as fans celebrated the U.S. team’s 19-9 victory over the Europeans.

One video captured the moment the cheers turned into hostile chanting against the Democratic President.

The president was also booed by fans at this week’s Congressional Baseball Game, one of the few occasions where a somewhat friendly atmosphere between Democrats and Republicans is attempted.
.
College football games have also become fertile ground for supporters, unsatisfied with President Biden, to share their political message from the stands.

The chant appeared to have first picked up steam at the Texas A&M Aggies game against Kent State Golden Flashes earlier in the month on September 4 and again during the Coastal Carolina Chanticleers game against the Citadel Bulldogs on September 2 … READ MORE.