While the mainstream media will sometimes use euphemisms to allude to this fact, they’d much rather talk about the bogeyman that seems to be to blame for every one of humankind’s current problems — climate change.

Of course it’s not just NPR but nearly the entire mainstream media that’s pushing the climate change narrative rather than “stigmatize” the actual culprits of monkeypox.

“A warming climate, vanishing forests and global travel have accelerated the spread of pathogens from animals to people, as well as among people in different parts of the world.”

The story contains not a single mention of gay sex.

Do a Google search for ‘monkeypox climate change’ and you’ll get tens of millions of hits: 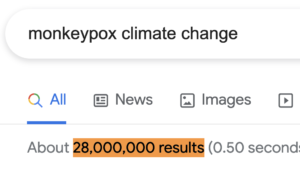 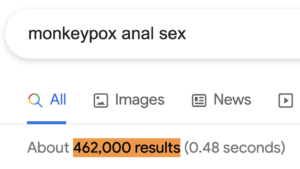 462,000 is still a big number, but the fact remains that there are 60 Google search results for monkeypox linked to climate change for every result discussing the real cause, homosexual encounters.

The truth does occasionally break through the clutter, as often as once in 61 times apparently. As The Guardian reported on July 27:

“The head of the World Health Organization has advised men at risk of catching monkeypox to consider reducing how many sexual partners they have ‘for the moment’.”

Not a bad suggestion. Here’s a better one: put that thing away.