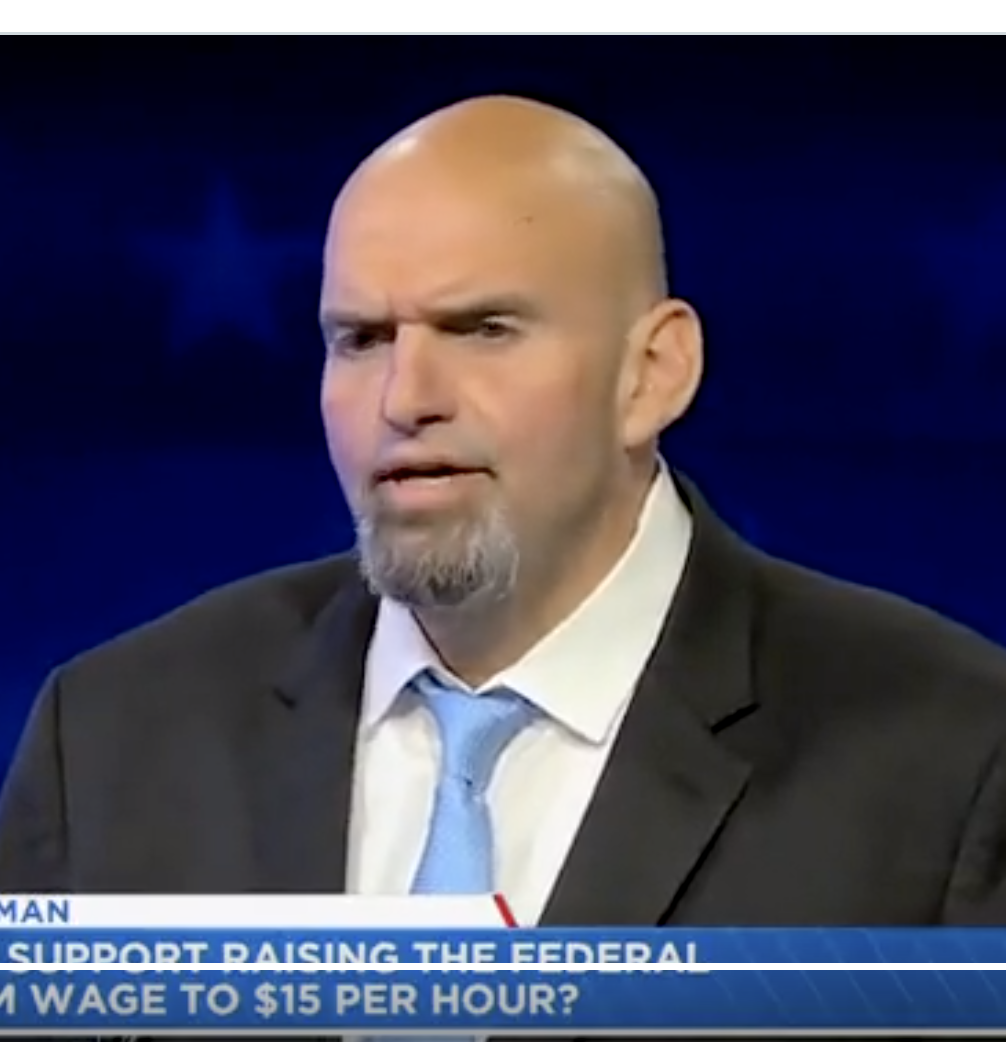 PLUS: Full debate coverage from the Associated Press

TOWNHALL – On Tuesday night, Mehmet Oz and John Fetterman finally met to debate after the Fetterman campaign tried to avoid debating Oz, then finally folded under immense pressure from all sides of the political spectrum.

Even before Tuesday’s debate between the two men running to represent the Keystone State in the U.S. Senate, Fetterman’s campaign had scrambled to lower expectations for their candidate, though they may not have lowered them enough.

Moderators began with an explanation of how the captioning system required by the Fetterman campaign for their candidate to participate — due to lingering auditory processing issues following Fetterman’s stroke — would work.

But even with the assistance of the captioning system, Fetterman struggled to respond to questions.

When asked about the federal minimum wage, Fetterman struggled to get through his answer that sought to invoke a “living wage,” calling it a “willing wage” and generally fumbling the answer.

“How can a man, you know, with with 10 gigantic mansion has am willing to talk about willing wage for anybody? Imagine a signal mom trying with two children trying to raise with them.” – John Fetterman

Fetterman didn’t do any better explaining what he meant by a “willing wage,” either:

FETTERMAN: "How can a man, you know, with with 10 gigantic mansion has am willing to talk about willing wage for anybody? Imagine a signal mom trying with two children trying to raise with them." pic.twitter.com/hbqePfo8Of

Fetterman struggles in Senate debate against Oz after stroke

HARRISBURG, Pa. (AP) — More than five months after experiencing a stroke, Pennsylvania Democrat John Fetterman struggled at times to explain his positions and often spoke haltingly throughout a highly anticipated debate Tuesday against Republican Dr. Mehmet Oz as they vie for a critical Senate seat.

In the opening minutes of the debate, Fetterman addressed what he called the “elephant in the room.”

“I had a stroke. He’s never let me forget that,” Fetterman said of Oz, who has persistently questioned his ability to serve in the Senate. “And I might miss some words during this debate, mush two words together, but it knocked me down and I’m going to keep coming back up.”

When pressed to release his medical records later in the debate, he refused to commit.
Oz, a celebrity heart surgeon, ignored his opponent’s health challenges throughout the debate, instead focusing on Fetterman’s policies on immigration and crime and his support for President Joe Biden. Democrats seized on a comment Oz made about abortion that seemed to suggest that the decision should be left to women, doctors and local politicians.

The forum had many of the trappings of a traditional debate, complete with heated exchanges and interruptions. But the impact of the stroke was apparent as Fetterman used closed-captioning posted above the moderator to help him process the words he heard, leading to occasional awkward pauses.

The biggest question coming out of the debate was whether it would have a lasting impact coming two weeks before the election and more than 600,000 ballots already cast. The stakes of the race to succeed retiring GOP Sen. Pat Toomey are huge: It represents Democrats’ best chance to flip a Senate seat this year — and could determine party control of the chamber and the future of Biden’s agenda.

But rather than watch the full hour as the candidates debated abortion, inflation and crime, many Pennsylvanians may only see clips of the event on social media. And both parties are preparing to flood the airwaves with television advertising in the final stretch.

“In my opinion, he did very well,” said Sheth, of Northwestern Medicine Marianjoy Rehabilitation Hospital in suburban Chicago. “He had his stroke less than one year ago and will continue to recover over the next year. He had some errors in his responses, but overall he was able to formulate fluent, thoughtful answers.”

Brooke Hatfield, a Maryland speech pathologist who has worked with stroke patients and watched the debate, described Fetterman’s speech errors as “common for people when they have a stroke.”

“We know that for many stroke survivors the first year can bring rapid improvement, but the brain will continue to rewire itself throughout someone’s life,” she said.

Problems with auditory processing do not mean someone also has cognitive problems, the experts agreed. The brain’s language network is different from regions involved in decision making and critical thinking.

Oz, a longtime television personality, was more at home on the debate stage. He cast himself as a moderate Republican looking to unite a divided state, even as he committed to supporting former President Donald Trump should he run for president again in 2024.

“I’m a surgeon, I’m not a politician,” Oz said. “We take big problems, we focus on them, and we fix them. We do it by uniting, by coming together, not dividing.”

Fetterman similarly committed to supporting Biden should he run again in 2024.

The Democratic president campaigned with Fetterman in Pittsburgh during the Labor Day parade and just last week headlined a fundraiser for Fetterman in Philadelphia. There, Biden said the “rest of the world is looking” and suggested a Fetterman loss would imperil his agenda.

While backing Biden, Fetterman also said, “he needs to do more about supporting and fighting about inflation.”

Abortion was a major dividing line during the debate.

Oz insists he supports three exceptions — for rape, incest and to protect the life of the mother. When pressed Tuesday night, he suggested he opposes South Carolina Sen. Lindsey Graham’s bill to impose a nationwide ban on abortion after 15 weeks because it would allow the federal government to dictate the law to states.

“I don’t want the federal government involved with that at all,” Oz said. “I want women, doctors, local political leaders letting the democracy that always allowed our nation to thrive, to put the best ideas forward so states can decide for themselves.”

Fetterman delivered a blunt message to women: “If you believe that the choice for abortion belongs with you and your doctor, that’s what I fight for.”

“Debates are more often lost than won, and Mehmet Oz lost this one with his line that abortion should be a decision between ‘a woman, her doctor and local elected officials,'” Begala tweeted. “He is fueling the Dems’ top issue. @JohnFetterman must be pleased.”
Fetterman is a star in progressive politics nationwide, having developed a loyal following thanks in part to his blunt working-class appeal, extraordinary height, tattoos and unapologetic progressive policies. On Tuesday, the 6-foot-9-inch Democrat swapped his trademark hoodie and shorts for a dark suit and tie.

But even before the debate, Democrats in Washington were concerned about Fetterman’s campaign given the stakes.

For much of the year, it looked as if Fetterman was the clear favorite, especially as Republicans waged a nasty nomination battle that left the GOP divided and bitter. But as Election Day nears, the race has tightened. And now, just two weeks before the final votes are cast, even the White House is privately concerned that Fetterman’s candidacy is at risk.

Fetterman’s speech challenges were apparent throughout the night. He often struggled to complete sentences.

At another point, the moderator seemed to cut off Fetterman as he struggled to finish an answer defending Biden’s student loan debt forgiveness program. He also stumbled before finishing a key attack line: “We need to make sure that Dr. Oz and Republicans believe in cutting Medicare and Social Security …”

The Pennsylvania Senate hopefuls faced each other inside a Harrisburg television studio. No audience was allowed, and the the debate host, Nexstar Media, declined to allow an AP photographer access to the event.

Oz had pushed for more than a half-dozen debates, suggesting Fetterman’s unwillingness to agree to more than one was because the stroke had debilitated him. Fetterman insisted that one debate is typical — although two is more customary — and that Oz’s focus on debates was a cynical ploy to lie about his health.

Fetterman refused to commit to releasing his full health records when asked repeatedly Tuesday by the moderator.

“My doctor believes that I’m fit to be serving. And that’s what I believe is where I’m standing,” Fetterman said.

While it is customary for presidential candidates to release health records, there is no such custom in races for the U.S. Senate. Some senators have, in the past, released medical records when running for president.

Democrats noted that the televised debate setting likely would have favored Oz even without questions about the stroke. Oz hosted “The Dr. Oz Show” weekdays for 13 seasons after getting his start as a regular guest on Oprah Winfrey’s show in 2004. Fetterman, by contrast, is a less practiced public speaker who is introverted by nature.

Many Republicans were thrilled by the debate’s outcome, although most — including Oz — tried to avoid piling on to concerns about Fetterman’s health.

“If Fetterman is some sort of leftist decoy to make Biden actually sound somewhat intelligent and articulate he’s doing a great job,” the former president’s son tweeted.
___
Peoples reported from New York. AP Medical Writer Carla K. Johnson contributed from Washington state.
___
Follow the AP’s coverage of the 2022 midterm elections at https://apnews.com/hub/2022-midterm-elections. And check out https://apnews.com/hub/explaining-the-elections to learn more about the issues and factors at play in the midterm.