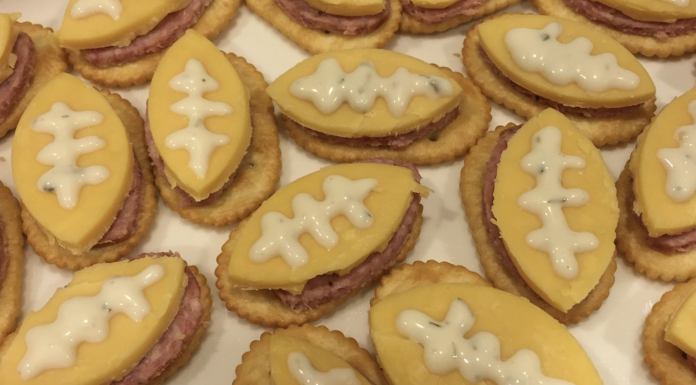 FOOD SAFETY NEWS – Millions of Americans will watch Super Bowl LVI and snack on hot and cold food throughout the four-hour festivities.

The length of the event means tables across the nation will have food out in room temperature settings for hours, leaving them susceptible to bacteria growth. And as any football fan knows, the snacking doesn’t stop until the game does.

“No matter who you’re rooting for, foodborne illness is a dangerous opponent we face during the game,” said Agriculture Secretary Tom Vilsack.

Here are some food safety tips for Super Bowl Sunday from the USDA:

Wash hands for 20 seconds before and after handling food, especially raw meat and poultry. Clean hands, surfaces and utensils with soap and warm water before cooking, during preparation and serving.

After cleaning surfaces that raw meat and poultry have touched, apply a commercial or homemade sanitizing solution (1 tablespoon of liquid chlorine bleach per gallon of water). Use hand sanitizer that contains at least 60 percent alcohol.

Use separate cutting boards, plates and utensils to avoid cross-contamination between raw meat or poultry and foods that are ready-to-eat, such as raw vegetables and fruits.

Confirm foods are cooked to a safe internal temperature by using a food thermometer.

Chill foods promptly if not consuming immediately after cooking. Don’t leave food at room temperature for longer than two hours. Set out portions of foods and refill serving dishes instead of setting out all of the food at the beginning of the game.

#2 Cook Your Food to a Safe Internal Temperature

If you order food and it’s delivered or picked up in advance of the big game, divide the food into smaller portions or pieces, place in shallow containers and refrigerate until ready to reheat and serve. You can also keep the food warm (above 140 degrees F) in a preheated oven, warming tray, chafing dish or slow cooker.

When reheating food containing meat or poultry, make sure the internal temperature reaches 165 degrees F as measured by a food thermometer.

If heating food in the microwave, ensure that contents are evenly dispersed. Because microwaved food can have cold spots, be sure to stir food evenly until the food has reached a safe internal temperature throughout.

A special word on salsa and guacamole:

“The reason that salsa and guacamole are so susceptible to contamination is that they are made with multiple raw, uncooked vegetables and are often stored at room temperature,” according to the Food and Drug Administration.

In addition to being left out for long periods of time, salsa and guacamole often contain diced raw produce including hot peppers, tomatoes and cilantro, increasing their chance of carrying harmful bacteria.

Anyone preparing fresh salsa and guacamole at home should be aware that these foods contain raw ingredients and that they should be carefully prepared and refrigerated to help prevent illness.

To prevent bacteria growth, these side dishes should be refrigerated within two hours. Those serving these foods should be aware of the length of time they have been out at room temperature.