Doctors Want Yet Another Childhood Vaccine

PROVIDENCE, R.I. (WPRI) ─ A new vaccine trial is underway at The Miriam Hospital, but this time it’s not for COVID-19.

The new vaccine targets Lyme Disease, and Dr. Timothy Flanigan hopes that dozens of Rhode Islanders will take part in the trial.

“The burden of Lyme and other tick-borne diseases is very substantial, and our patients suffer very considerably, not only with acute illness but also with the long-term [after effects],” Flanigan said.

Flanigan is the co-director of the Lyme Disease Center at The Miriam. He said the hospital is now conducting a Phase 2 clinical trial of the vaccine and is requesting teenagers take part.

“They’ve already enrolled the adults and [the results] show that it’s well tolerated,” Flanigan said. “Now they’re enrolling teenagers and kids over the age of five. That’s, I think, very exciting because Lyme really affects kids but also often the research in children is left far behind.”

Flanigan said during the trial, two-thirds of the participants will receive the vaccine while the others will receive a placebo … Click here to read more.

Do You Have Lyme Disease?

Learn the Stages of Lyme Disease

Lyme disease occurs in three stages: early localized, early disseminated and late disseminated. However the stages can overlap and not all patients go through all three.
A bulls-eye rash is usually considered one of the first signs of infection, but many people develop a different kind of rash or none at all. In most cases, Lyme symptoms can start with a flu-like illness. If untreated, the symptoms can continue to worsen and turn into a long-lived debilitating illness.

Symptoms with early localized (or acute) Lyme disease may begin hours, a few days or even weeks after a tick bite. At this point, the

infection has not yet spread throughout the body. Lyme is the easiest to cure at this stage. 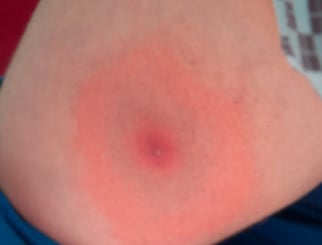 Early disseminated Lyme may occur several weeks or months after the tick bite. Bacteria are beginning to spread throughout the body. In addition to flu-like symptoms, this stage is often characterized by increase in symptoms such as:

If Lyme disease isn’t promptly or effectively treated in the first two stages, late disseminated (post-treatment, chronic, or neurological) Lyme occurs weeks, months or even years after the tick bite. The Lyme bacteria have spread throughout the body and many patients develop chronic arthritis as well as an increase in neurological and cardiac symptoms. Symptoms may include: