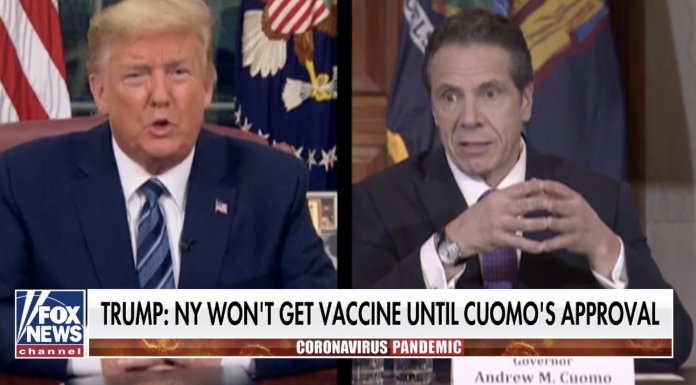 Trump, speaking in the Rose Garden Friday, said the government will delay delivery of the vaccine to New York until the Democratic governor commits to distributing it “immediately.”

Cuomo responded by calling Trump a “bully” and expressing confidence in a vaccine rollout managed by the incoming Biden administration.

“To hear this kind of politicking is very disheartening, but it’s also a smear on Gov. Cuomo’s own record,” Dr. Qanta Ahmed, a pulmonologist, said on “Fox & Friends Weekend.”

“He did extraordinary things at the height of the crisis, collaborating with the federal government and President Trump. … He also had a very good idea doing geographical synchrony between Connecticut, New Jersey and New York,” she said. “But right now we have 1,700 New Yorkers in hospitals. We lost 24 New Yorkers that died on Thursday. We have a rising prevalence rate.”

“This is not what we want to see and Gov. Cuomo did bring this upon himself by suggesting that he would formulate his own advisory panel if the FDA approved or provided emergency use authorization to any vaccine product,” Ahmed said.

As Pfizer and other companies are in final stages of getting coronavirus vaccines approved, Cuomo skipped White House briefings on distribution of the vaccines, the New York Post reports.

“I want this to be quickly rectified,” Ahmed said of Cuomo’s reluctance to use vaccines approved under Trump.