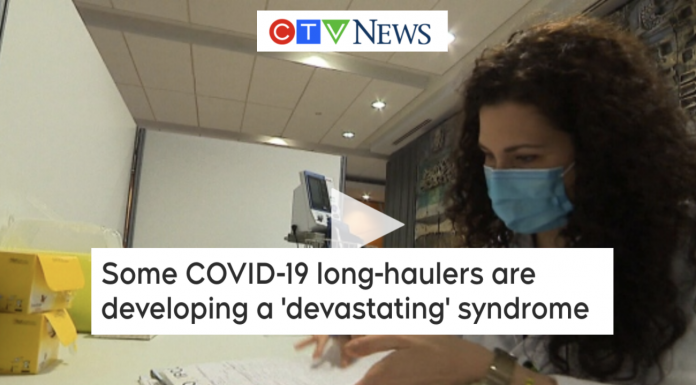 “I had no idea this level of fatigue existed before I got sick. It’s like every cell in my body is out of energy.”

CTVNews, TORONTO — It began with the typical COVID-19 symptoms for Angela Griffin back in March 2020. She developed a sore throat, headache, fatigue, body aches, and a tightness in her chest.

When she visited the ER, she was unable to get tested for the disease because they were only testing healthcare workers, recent travelers, and close contacts of confirmed cases at the time. However, the doctors told her she was clinically positive for COVID-19 based on her symptoms and to assume she was infected.

That was only the beginning of what Griffin has described as a “rollercoaster of symptoms” she has experienced since her initial illness:

“Every day you never knew what might happen that day,” Griffin said during a telephone interview with CTVNews.ca from her home in Vancouver on Tuesday. “You’d get new symptoms, you’d get some come back that you had before.”

It’s the persistent fatigue, however, that has most upended her life.

Griffin recalled that, in August 2020, when she would try to go for a run or play with her two children she would be so exhausted by the exertion that it would take her days to recover.

“I would just end up in bed like basically paralyzed. I couldn’t lift my arm. I couldn’t roll over,” she said.

It was around that time that Griffin said she developed brain fog and memory issues.

“I felt like there was all these thoughts in my head, but I couldn’t grab onto them. It was really weird. It’s a terrible feeling,” she said.

By September 2020, Griffin was diagnosed with a complex chronic disease called myalgic encephalomyelitis, which is also known as chronic fatigue syndrome (ME/CFS).

“I had no idea this level of fatigue existed before I got sick. It’s like every cell in my body is out of energy,” she said … Click here to read more.