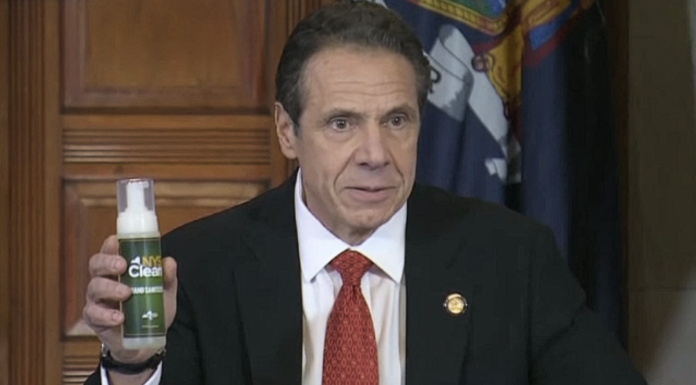 “New Yorkers could suffer from the virus as a direct result of Cuomo’s baseless fear-mongering about a potential coronavirus vaccine.”

‘There was no mobilization of the government…’

Headline USA – New York Gov. Andrew Cuomo on Monday claimed that President Donald Trump’s coronavirus response was a failure because it lacked a complete “mobilization of the federal government.”

“The Trump administration denied COVID so they were never ready for it. There was no mobilization of the government,” Cuomo claimed.

Cuomo, however, received more support from the Trump administration than any other state affected by the coronavirus pandemic.

The federal government sent hundreds of ventilators to the state during the virus’s peak, which Cuomo then argued wasn’t enough.

He was wrong, of course. The 30,000 ventilators he claimed to need were not necessary at all, yet he has never admitted as much.
...article continued below
- Advertisement -

The federal government also mobilized hundreds of private contractors to build emergency field hospitals across the country, several of which were in New York. Few of these hospitals were even used.

And the U.S. Navy hospital ship Comfort, which Trump sent to New York City in April, returned back to its home base after treating just a few patients.

Yet Cuomo continues to insist that it is the federal government’s fault that his state suffered the worst of the coronavirus pandemic.

One glance at his policies proves that this is not true.

Tens of thousands of senior citizens are dead in his state because Cuomo signed a policy in March forcing nursing homes to accept coronavirus patients.

And now, even more New Yorkers could suffer from the virus as a direct result of Cuomo’s baseless fear-mongering about a potential coronavirus vaccine.

News broke on Monday about a potential vaccine, developed by Pfizer independently of the federal government, that is 90% effective at treating COVID-19.

“The good news is that the Pfizer tests look good and we’ll have a vaccine shortly. The bad news is that it’s about 2 months before Joe Biden takes over and that means this administration is going to be implementing a vaccine plan,” Cuomo said.

Cuomo then declared that he and several other Democratic governors are talking about how they can “stop” the Trump administration’s vaccine development “before it does damage.”

“We can’t let this vaccination plan go forward the way the Trump administration is designing it. Biden can’t undo it two months later. We’ll be in the midst of it,” Cuomo said.

Cuomo also said he expects the “tone” government officials use to talk about the coronavirus will change significantly if Biden becomes president in January. Read more.