COVID-19 Could Make Wildfire Season Worse Than Ever 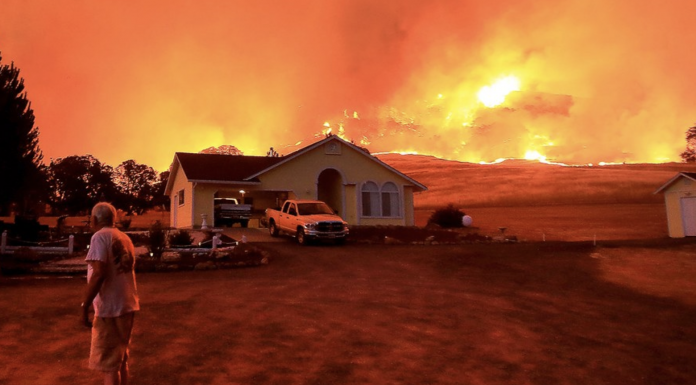 Boise, Idaho | AP – They are two disasters that require opposite responses: To save lives and reduce the spread of COVID-19, people are being told to remain isolated. But in a wildfire, thousands of firefighters must work in close quarters for weeks at a time.

Wildfires have already broken out in Texas and Florida, and agencies are scrambling to finish plans for a new approach. They are considering waivers for some training requirements to previously-certified crew members, and moving some training online.

Other proposals include limiting fire engines to a driver and one passenger, requiring other crew members to ride in additional vehicles. They may scrap the normal campsite catering tents in favor of military-issue MREs, or “Meals Ready to Eat” to reduce touching serving utensils.

Only ‘critical property and infrastructure’ can be saved

Federal resources for firefighting efforts may be more scarce, leaving states to deal with more fires.

In light of the “unprecedented challenge” of the pandemic, Forest Service resources will be used “only when there is a reasonable expectation of success in protecting life and critical property and infrastructure,” says Forest Service Chief Victoria Christiansen.

Wildland fire camps have always had a reputation for spreading illness. Norovirus outbreaks have occurred and outbreaks of illnesses collectively dubbed the “camp crud” are yearly occurrences for many.

The job is so demanding that it’s typically done by younger, healthy and physically fit people. But the nature of the job also works against them: firefighters regularly experiencing high stress, inhaling smoke and dust and dealing with poor sleeping and personal hygiene.

“We have really been trying to educate and change that culture because not just in this situation but in others, it’s not OK to just tough it out if something’s wrong,” she said.

You don’t have to look too far back in history to see how the one-two punch of a pandemic and wildfire can decimate communities.

The 1918 influenza pandemic killed an estimated 50 to 100 million people worldwide. In October 1918, sparks from a passing train ignited fields near Cloquet and Moose Lake, Minnesota.

“If you were lucky enough to survive the wildfire, you were crammed into evacuee housing.”

Four hundred and fifty people were killed in an area that spanned 1,500 square miles (about 3,885 square kilometers). There were 21,000 injuries and 52,000 displaced people, said Curt Brown, a journalist and the author of “Minnesota, 1918.” The aftermath made it easy to spread disease.

“It was the perfect situation to spread the flu — if you were lucky enough to survive the wildfire, you were crammed into evacuee housing,” he said. At least 100 people died of the flu in evacuee housing, an estimate Brown called conservative.

There also are concerns about preparations not being done. Typically, agencies spend months and millions of dollars preparing for wildfire season — clearing brush and doing prescribed burns to reduce the plants that feed massive wildfires.

That’s not happening in many places because some fire managers are trying to allow employees to abide by social distancing guidelines as long as possible and to curb smoke from the prescribed burns during the pandemic.

Smoke can make breathing more difficult for people with asthma and other lung conditions.

“The biggest issue I see right now is that the prescribed burns aren’t getting done,” says Casey Judd, the president of the Federal Wildland Fire Services Association, which advocates on behalf of federal firefighters in 42 states.

“That’s going to increase the fire load. He said leaders should have started working on a coronavirus plan for firefighters months ago. “I’m not suggesting they’re dragging their feet, but obviously they’re trying to figure it out just like everyone is,” he said.

Kerry Greene, an emergency management specialist and spokeswoman with the U.S. Forest Service, said that although the plans haven’t been released yet, they’re coming together.

The agency is already working to follow directives from the U.S. Centers for Disease Control and Prevention as well as infectious disease guidelines created in 2008 after a bird flu epidemic.

Like many, fire managers are to some extent flying blind. “Some of the things we’re probably going to have to learn as we go,” Greene said.

For most people, the virus causes mild or moderate symptoms, such as fever and cough that clear up in two to three weeks. For some, especially older adults and people with existing health problems, it can cause more severe illness, including pneumonia and death.

Wildland firefighters are first responders just like hospital staff and police, and should be protected accordingly, said , said Boise State University assistant professor Luke Montrose, an expert in community and environmental health. “Like potentially having them wear masks when traveling from place to place.”

Under the $2 trillion federal CARES Act, federal fire crews will have paid sick leave for the first time, she said, which officials hope will encourage crew members to take sick leave when they need it. It’s not clear if all state or contract firefighters will have the same benefit.

Scott McLean, a spokesman for the California Department of Forestry and Fire Protection, said the agency is following strict physical distancing protocols, and that could mean making larger campsites near wildfires and pulling in additional trailers for showers and other hygiene needs.

But there is no agency-wide guidance beyond the recommendations every American has been given for the pandemic, he said.

“It has to be handled on a case-by-case basis because every incident is different. We rely on each individual to be responsible, and we have safety officers on the teams,” McLean said. “We will meet those needs as they come.”