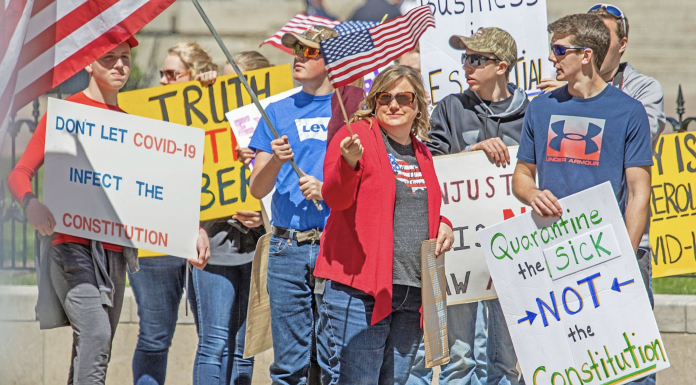 Coronavirus Protests – Approve Or Disapprove? Record your vote and comment below.

(AP) – A majority of Americans disapprove of protests against restrictions aimed at preventing the spread the coronavirus, according to a new poll that also finds the still-expansive support for such limits — including restaurant closures and stay-at-home orders — has dipped in recent weeks.

The new survey from the University of Chicago Divinity School and The Associated Press-NORC Center for Public Affairs Research finds 55% of Americans disapprove of the protests that have popped up in some states as some Americans begin chafing at public health measures that have decimated the global economy.

Thirty-one percent approve of the demonstrations.

Texas hair salon owner Shelley Luther was sentenced to seven days in jail last week after refusing to apologize to a judge for opening her salon in defiance of Republican Gov. Greg Abbott’s emergency orders.

She was released less than 48 hours later after Abbott removed jail as a punishment for defying virus safeguards.

In Michigan, thousands of people rallied outside the state capitol last month to protest Democratic Gov. Gretchen Whitmer’s restrictions. Hundreds returned two weeks later, some of them armed, to demonstrate inside the statehouse.

Democrats are more likely than Republicans to disapprove of such protests, 67% to 51%. Thirty-two percent of Republicans and 25% of Democrats say they approve.

Dee Miner, 71, of Fremont, California, said she disapproves of the protests, but also feels people have the right to express themselves.

“We have to have the right to protest, but I have to tell you, seeing those people with those weapons at the statehouse in Michigan was pretty disturbing,” said Miner, a Democrat and retired dental office manager. “I felt sorry for the legislators having to work with that angry mob in the lobby. It seemed like it was just pure intimidation.”

Adam Blann, 37, of Carson City, Nevada, said he does not personally favor the protests, but does not believe they should be restricted.

“Its a tough situation,” said Blann, a Republican-leaning voter who works in the natural gas industry. “But I also think that one of the reasons we live in a great country is that we have freedom of expression, freedom of speech, freedom to protest.”

As some states have begun to slowly ease restrictions on businesses and individuals, the poll finds that 71% of Americans favor requiring people to stay in their homes except for essential errands. Support for such measures is down slightly from 80% two weeks earlier.

Similarly, 67% of Americans now say they favor requiring bars and restaurants to close, down from 76% in the earlier poll. The poll also suggested dipping support for requiring Americans to limit gatherings to 10 people or fewer (from 82% to 75%) and requiring postponement of nonessential medical care (from 68% to 57%).

Roberts said people in his southwestern Virginia community are driving the short distance into neighboring Bristol, Tennessee, to patronize restaurants open there.

“People from Virginia have been crossing over into Tennessee to eat and just get out, you know, and do things, and Virginia is losing out on it,” said the 61-year-old Republican.

Among Republicans like Roberts, the share supporting stay-at-home orders dipped from 70% in late April to 57% in the latest poll.

The share supporting other measures also dropped, from 75% to 63% for limiting gatherings to no more than 10 people and from 70% to 53% for closing bars and restaurants.

Among Democrats, 84% favor stay-at-home orders, down slightly from 91% in the earlier poll.

Eighty-seven percent of Democrats favor barring gatherings of more than 10 people, and 79% support bar and restaurant closures, about the same as in the previous poll.

Blann, the Nevada resident, said he didn’t mind officials imposing certain restrictions for a short period of time, but fears the potential of authorities being unwilling to roll back some of their newly declared powers.

“I do think the government should respond to allowing people to make more of their own personal choices without legal repercussions,” said Blann, who said he doesn’t expect to find himself in a crowded bar anytime soon, but is looking forward to being able to go back to church.

The poll found most Americans in favor of some kind of restriction on in-person worship, with 42% saying that should be allowed with restriction and 48% that it should not be allowed at all.

Marilou Grainger, a retired nurse anesthetist and registered Republican in Washington, Missouri, said she’s torn between the need to take precautions against the virus while also allowing people to make their own decisions.

“I think we should still be under a bit of quarantine, especially people who are 60 or older,” said Grainger, 67, who believes the jury is still out on whether lockdowns and stay-at-home orders have been effective in stemming the spread of the virus.

“Did we make a mistake? Did we totally annihilate our economy, or did we actually save some people issuing this quarantine?” she asked.
___
The AP-NORC poll of 1,002 adults was conducted April 30-May 4 using a sample drawn from NORC’s probability-based AmeriSpeak Panel, which is designed to be representative of the U.S. population. The margin of sampling error for all respondents is plus or minus 4.2 percentage points.

Coronavirus Protests – Approve Or Disapprove? Record your vote and comment below.