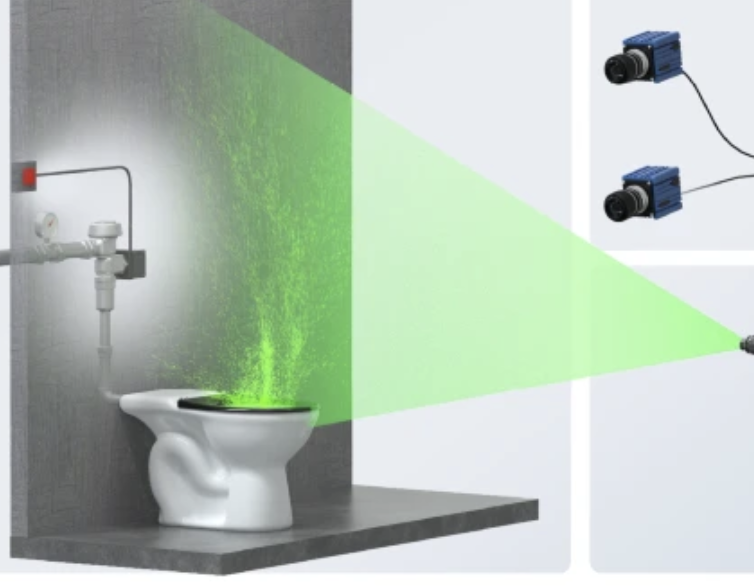 Water-saving toilets may be great for the environment, but at what cost to human health?

NATURE – Aerosols can transmit infectious diseases including SARS-CoV-2, influenza and norovirus. Flushed toilets emit aerosols that spread pathogens contained in feces, but little is known about the spatiotemporal [space and time] evolution of these plumes or the velocity fields that transport them.

Using laser light to illuminate ejected aerosols we quantify the kinematics of plumes emanating from a commercial flushometer-type toilet, and use the motion of aerosol particles to compute velocity fields of the associated flow.

The toilet flush produces a strong chaotic jet with velocities exceeding 2 m/s; this jet transports aerosols to heights reaching 1.5 m within 8 seconds of initiating a flush. Quantifying toilet plumes and associated flow velocities provides a foundation for future design strategies to mitigate plume formation or to disinfect pathogens within it.

Flushing a toilet generates an energetic turbulent flow that releases droplets and aerosols into the air1,2,3,4, reaching heights in excess of 1.5 m5 in scenarios that present increased risk of aerosol- and fomite-mediated disease transmission from feces6,7,8,9.

The largest droplets settle out within seconds, but smaller aerosols (<5 𝜇<5 μm) remain suspended10, 11. The presence of pathogens on toilet bowl sidewalls or in bowl water contributes to contamination of the aerosols4, and contamination of bowl water may persist after dozens of flushes12, 13.

Bioaerosol concentrations released from a flushed toilet vary depending on the type of toilet14, 15, ventilation performance16, radial position around the bowl17, water supply pressure level18 and the presence of fecal waste11. While growth of the aerosol plume is reduced—but not eliminated—by the presence of a closed lid2, 10, 19, toilets in public, commercial, or healthcare settings typically do not have lids. While previous studies document where toilet aerosols end up, very little is known about the physics and kinematics of how they get there.

While many epidemiological associations with fecal-oral sanitary contexts are well established, their aerosol counterparts are lacking. Respiratory exposures to airborne microbes in sanitary settings has been a public health focus as the availability of enclosed public toilets expanded with urbanization.

Although quantitative risk assessments in this hygiene context have been constructed20, their practical application requires emission source characteristics as well as the time-resolved identity, distribution, abundance and specific persistence of potential pathogens aerosolized in respirable size ranges21. Sanitary aerosol exposures are acute, with a strong dependence on occupant behavior, which adds to the challenge of assessing respiratory risks in confined lavatory environments.

The risks associated with transmitting respiratory and enteric viruses through use of public toilets due to contaminated aerosols from the toilet plume, suspended aerosol from prior users or transmission via high-touch surface should be mitigated where possible4, 22, 23. SARS-CoV-2 and other viruses have been shown to survive on surfaces for several days24,25,26, and enteric bacteria—potentially pathogenic and otherwise—such as C. difficile are aerosolized upon flushing and subsequently deposit onto local architectural surfaces as potential fomites10.

Current knowledge of toilet aerosol plumes derives mostly from discrete measurements of airborne and settled particle concentrations. Knowledge of the toilet plume kinematics is limited to high-speed video of large ejected droplets in close proximity to the bowl8, qualitative visualization of a dry ice plume from an aircraft lavatory27 and numerical simulations of flow velocities and expelled particles within an idealized toilet model15.

Full-field, time-resolved measurements of the spatiotemporal plume dynamics—including the airflow velocity fields—are lacking, and are critical for development and testing of future design strategies to mitigate human exposure through plume formation, disinfect pathogens carried by the plume28, 29 and enhance plume removal through ventilation20.

To visualize and quantify aerosol plume kinematics over a flushometer-type commercial toilet typical of those in use in North America (Fig. 1A), we use continuous and pulsed lasers to create a thin light sheet (Fig. 1B) that illuminates a vertical plane on the toilet centerline. When the toilet is flushed, the resulting aerosol plume scatters light that is imaged from the side with cameras (Fig. 1C). The toilet flush sequence begins with a remote button push that activates a solenoid valve on the flushometer, allowing supply water to enter the flushometer valve (in public restrooms this activation is often done by an optical motion sensor).

Flush water entering the bowl creates an energetic turbulent flow with a familiar audible signature. We use sound pressure levels measured by a noise meter near the bowl as a metric for the strength and duration of the flush cycle (Fig. 1D). The flushing action lasts for approximately 5.5 seconds after the button is pushed (𝑡=t= 0), with most of the flush energy occurring for 0.5<𝑡<50.5<t<5 s; much of the sound recorded for 𝑡>6t>6 s is associated with the bowl refilling after the flush.

To demonstrate the structure of the illuminated aerosol plume in the laboratory as visible to the human eye, we used a continuous laser and a commercial digital camera to take a sequence of color images of the plume (Fig. 2) …