China: “We Do Not Spread Virus Disinformation” 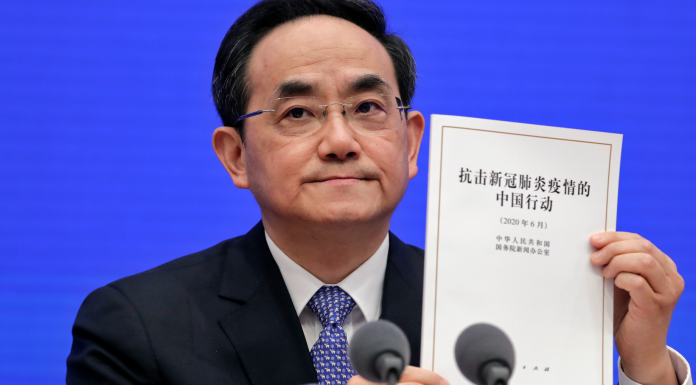 BEIJING — China’s Foreign Ministry has criticized a European Union report alleging that Beijing was spreading disinformation about the coronavirus pandemic.

Spokesperson Hua Chunying told reporters Thursday that “the EU evades many obvious facts but specifically mentions China. This undermines the credibility and authority of this report.” Hua called the accusations against China “false.”

According to the European commission, Russia and China have mounted “targeted influence operations and disinformation campaigns in the EU, its neighbourhood and globally.” That marked the first time China has been named by the EU executive body as spreading disinformation.

Hua also criticized Australian Prime Minister Scott Morrison for saying that Australia wouldn’t respond to Chinese coercion. The two countries have been sparring over Australia’s calls for an inquiry into the coronavirus pandemic, which Chinese officials see as an attempt to blame Beijing.

HERE’S WHAT ELSE IS HAPPENING TODAY:

Trump made the announcement during a roundtable with African American supporters Wednesday afternoon that did not appear on his public schedule.

His signature rallies often draw tens of thousands of people but have been on hiatus since March 2 because of the coronavirus pandemic, which has now killed more than 110,000 people in the U.S.

Trump’s campaign has been planning to resume rallies as it tries to move past the pandemic, even as cases continue to rise in some parts of the country.

However, independent experts said those numbers are in doubt.

Health Department consultant Miguel Valencia said at a news conference Wednesday that Puerto Rico’s confirmed COVID-19 cases peaked at 84 cases on March 31 and deaths at six on April 6. Overall, Puerto Rico has reported more than 5,300 confirmed cases and at least 143 deaths on the island of 3.2 million people.

Health Secretary Lorenzo González says the data will be taken into account when Gov. Wanda Vázquez decides whether to allow curfew and quarantine restrictions to expire on Monday. Those orders bar everyone except essential workers from being outside from 7 p.m. to 5 a.m.

But critics complain the island has done too little testing and most of what has been done used the wrong sort of tests.

LONDON — The U.K. Department of Health and Social Care says 67% of those who tested positive for COVID-19 have provided details of their recent contacts to the new test and trace program.

The efforts of the program are being closely watched in the U.K. as a way to ease the nation out of its lockdown while still controlling the virus. Britain has the second-highest confirmed virus death toll in the world — over 41,000 — behind only the United States.

The head of the program, Dido Harding, said “we’re not at the gold standard yet that we want to be” of identifying and contacting all ties to new cases within 48 hours “but you can absolutely see the path of how we’re going to get there.”
___
BANGKOK— One of Thailand’s major tourist attractions is barring entry to foreigners, professing fear that they could spread COVID-19.

Signs at the main gate of Wat Pho, the Buddhist temple adjacent to the Grand Palace in Bangkok, say in English: “Open for Thai only” and “NOW NOT OPEN FOR FOREIGNERS.”

The temple, one of the country’s grandest, is best known for housing the 46-meter (151-foot) long Reclining Buddha. The temple complied with a government closure of gathering places to fight the coronavirus by barring all visitors for two months, and reopened last Friday.
—-
JOHANNESBURG — The head of the Africa Centers for Disease Control and Prevention says “we continue to remain hopeful” that Tanzania will cooperate by sharing its COVID-19 data even as the country’s president declared victory over the pandemic.

John Nkengasong says “they understand exactly what is at stake” in the East African nation, which has not updated its virus data since late April.

Tanzania’s number of cases remains frozen at 509, while opposition leaders have asserted there are actually tens of thousands.

President John Magufuli at a church service on Sunday declared that “corona in our country has been removed by the powers of God,” and he praised the congregation for not wearing face masks. He has warned that masks not approved by the government could be infected with the virus.
___
HELSINKI — Finland says it will ease coronavirus travel restrictions and lift internal border controls for passenger traffic with Nordic neighbors Denmark, Iceland and Norway as well the Baltic countries of Estonia, Latvia and Lithuania effective June 15.

Interior Minister Maria Ohisalo told reporters on Thursday the measure will for the time being exclude close neighbor Sweden, where the coronavirus situation is the worst in the Nordic region and the risk of spreading it through cross-border travel the highest.

She said the Finnish government’s decision to leave Sweden out “wasn’t easy as Sweden is a very important neighbor for us. We hope this won’t affect our relations.”

Ohisalo stressed the government would reassess the situation with Sweden in two weeks.

The rights group said that relatives of prisoners near Abu Dhabi as well as another in Dubai say that prisoners have been denied adequate medical care and that authorities are not providing information to inmates or their families about the outbreaks of the coronavirus inside the detention centers. They reported overcrowding and unsanitary conditions in the prisons.

Family members say prison authorities transferred those exhibiting symptoms to unknown locations without testing or medical care for weeks. Relatives also said Emirati prison authorities did not increase supplies of soap or hand sanitizer and did not distribute gloves or masks to detainees.

The rights group was also told that authorities have denied prisoners with HIV access to the hospital that is in charge of their care since mid-March.

Human Rights Watch said it wrote to the UAE’s Interior Ministry on June 7 and has received no response. It noted that in April, Emirati authorities released over 4,000 detainees, but not political detainees held for peaceful dissent.
___
MOSCOW — Russia’s coronavirus caseload surpassed 500,000 on Thursday, after health officials reported 8,779 new infections.

The nation’s total currently stands at 502,436 confirmed cases, including 6,532 deaths.

Experts both in Russia and abroad expressed doubts about the country’s remarkably low pandemic death toll, with some alleging that numbers were manipulated for political reasons. The Russian government repeatedly denied the allegations.

Despite recording almost 9,000 new cases daily for the past month, Russian authorities have started easing lockdown restrictions in many regions — including Moscow, which accounts for about 40% of all virus cases and almost half of officially reported deaths.

This week the Moscow mayor lifted the stay-at-home order in place since late March, allowing residents to travel freely around the city, and gave a green light for a wide range of businesses — such as beauty parlors, restaurants and museums — to reopen in the next two weeks.

Kremlin critics condemn the reopening as premature and link them to the vote on the constitutional reform that would allow President Vladimir Putin to stay in power until 2036, scheduled for July 1.
___
ANKARA, Turkey — Turkey has restarted international flights for the first time since planes were grounded on March 28 to stem the coronavirus pandemic.

A plane belonging to Anadolu Jet, a subsidiary of Turkish Airlines, left Istanbul’s Sabiha Gokcen airport for London at 08:40 a.m. Thursday. It was followed by flights to Amsterdam and Dusseldorf, Germany. Meanwhile, a Turkish Airlines flight also departed for Dusseldorf from the city’s other airport, Istanbul Airport.

Only nationals of the destination countries or those with residence permits were allowed on the flights.

Entry into the terminals was also strictly regulated, with officials checking temperatures at the entrance and only allowing passengers with valid tickets to step inside.

The spike comes as the government moved ahead with the reopening of restaurants, shopping malls and places of worship in most of India after lockdown of more than two months. Subways, hotels and schools remain closed.

The actual infection numbers are thought to be higher because of limited testing.

The Health Ministry said it was ramping up the capacity with daily testing of more than 145,000 people. The number of tests in India crossed 5 million on Wednesday.

It also said that the total number of recovered patients has exceeded the active cases for the first time with the recovery rate of nearly 49%.
___
SEOUL, South Korea — South Korea is reporting 45 new cases of COVID-19, all but two of them in the capital region, continuing a weekslong resurgence that health authorities fear could develop into a huge wave.

The figures announced Thursday bring national totals to 11,947 cases and 276 deaths. The capital of Seoul has 21 new infections, while 22 other cases are in nearby Incheon and Gyeonggi.

South Korea has been reporting around 30 to 50 new cases a day since late May, mostly in the densely populated Seoul area where about half of South Korea’s 51 million people live.

Despite expressing concern over the steady rise in infections, government officials are resisting calls to reimpose stronger social distancing measures. They cite concerns over hurting a fragile economy.
___
BEIJING — China has reported a small spike in imported confirmed cases of the coronavirus to 11. There were no new deaths or cases of local transmission in Thursday’s report.
Chinese officials say just 62 people remain in treatment for COVID-19.

In addition, 130 people are under observation and isolation for showing signs of the illness or testing positive for the virus without showing any symptoms, as a safeguard against them possibly spreading it to others.

China has reported a total of 4,634 deaths from COVID-19 — a figure that hasn’t changed in weeks — among 83,057 cases recorded since the virus was first detected in the central industrial city of Wuhan late last year.
___