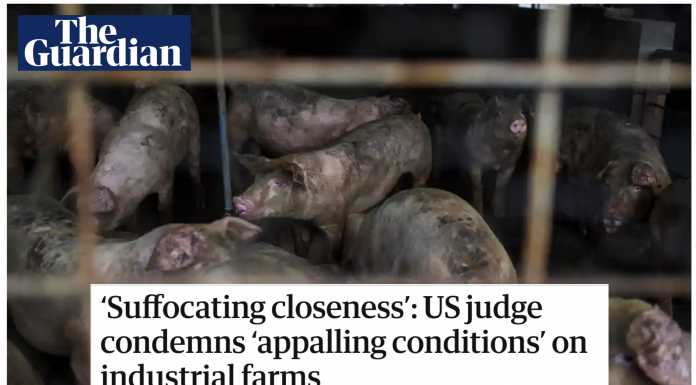 The Guardian – A US judge has issued a blistering condemnation of industrial farming practices.

The judgment comes as one US meat giant finally settles after a six-year legal battle with plaintiffs who sued the company over the stench, flies, buzzards and truck traffic coming from its industrial swine farms in North Carolina.

J Harvie Wilkinson III, one of the judges in a case that pitted locals against the Smithfield subsidiary formerly known as Murphy-Brown, decried the “outrageous conditions” at Kinlaw Farms, the operation at the center of the lawsuit – “conditions that there is no reason to suppose were unique to that facility”.

“Smithfield Foods, Inc., is a pork producer and food-processing company based in Smithfield, Virginia, in the United States, and a wholly owned subsidiary of WH Group of China.” – Wikipedia

“How did it come to this?” wrote Wilkinson, who was nominated to the fourth US circuit court of appeals by then-president Ronald Reagan and has served since 1984:

“What was missing from Kinlaw Farms – and from Murphy-Brown – was the recognition that treating animals better will benefit humans. What was neglected is that animal welfare and human welfare, far from advancing at cross-purposes, are actually integrally connected. The decades-long transition to concentrated animal feeding operations [CAFOs] lays bare this connection, and the consequences of its breach, with startling clarity.”

Wilkinson described a system in which pigs were forced to live in enclosures they had outgrown, reducing them …

“to almost suffocating closeness … The dangers endemic to such appalling conditions always manifested first in animal suffering. Ineluctably, however, the ripples of dysfunction would reach farm workers and, at last, members of the surrounding community.”

More than 500 North Carolinians, most of them black, filed more than two dozen lawsuits in 2014. Some lived near farms that had contracts with Smithfield. Others lived near farms owned by the company outright.

They described being trapped inside their own homes, sickened by the smell of hog waste stored in open pits, and unable to hang laundry, cook outdoors, or entertain visitors … Read more. | Screenshot: The Guardian