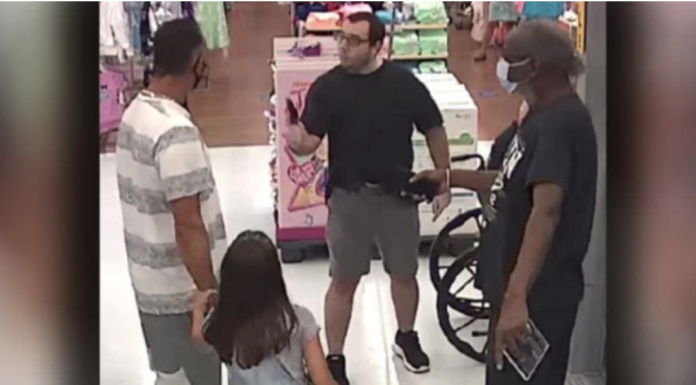 WEST PALM BEACH, Fla. (AP) — Felony charges have been dropped against a Florida man who pointed a gun at another Walmart shopper in a dispute over not wearing a mask, authorities said.

The Sun-Sentinel reported Tuesday that prosecutors will not pursue charges against Vincent Bruce Scavetta, 28, of aggravated assault with a deadly weapon and improper display of a firearm.

Some of the incident was captured on Walmart security video. It showed Scavetta pointing a gun during the argument with Christopher Estrada, who was with his young daughter.

Scavetta said Estrada struck him in the forehead with an umbrella and that led him to pull out his weapon.

Police said Scavetta turned in his gun and has a valid concealed carry permit.

Estrada said he raised the umbrella after Scavetta threatened him but wasn’t sure if it made contact.

Scavetta told investigators he took off the mask he was wearing as he entered the store because it was wet from the rain, fogging up his glasses and making it hard to breathe.

“Although there was probable cause to make an arrest, the evidence cannot prove all legally required elements of the crime alleged and is insufficient to support a criminal prosecution,” prosecutors stated in court documents.

Why Covid Is Worst In Florida