Can Trump Shut Down Twitter Or Force States To Reopen? 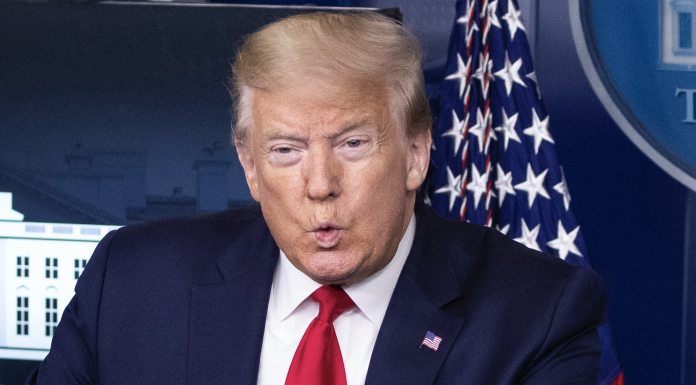 “When somebody is the president of the United States, the authority is total.” – President Donald Trump |

WASHINGTON (AP) — Threatening to shut down Twitter for flagging false content. Claiming he can “override” governors who dare to keep churches closed to congregants.

Asserting the “absolute authority” to force states to reopen, even when local leaders say it’s too soon.

As he battles the coronavirus pandemic, President Donald Trump has been claiming extraordinarily sweeping powers that legal scholars say the president simply doesn’t have. And he has repeatedly refusing to spell out the legal basis for those powers.

“It’s not that the president does’t have a remarkable amount of power to respond to a public health crisis.

It’s that these are not the powers he has,” said Stephen Vladeck, a University of Texas School of Law professor who specializes in constitutional and national security law.

First it was Trump’s assertion that he could force governors to reopen their economies before they felt ready. “When somebody’s the president of the United States, the authority is total,” he claimed.

Trump soon dropped the threat, saying he would instead leave such decisions to the states.

But he has revived the idea in recent days as he has tried to pressure governors to allow churches and other places of worship to hold in-person services, even where stay-at-home orders and other limits on large gatherings remain in effect.

Asked Tuesday what authority he had to enforce such a mandate, Trump was cagey.

“I can absolutely do it if I want to,” he said. “We have many different ways where I can override them and if I have to, I’ll do that.”

The White House declined to spell out any specific statute, but White House spokesman Judd Deere said in a statement that “every decision the president has made throughout this pandemic has been to protect the health and safety of the American people.”

“Getting the nation back to work, back to sporting events, back to churches, back to restaurants, and doing so safely and responsibly is the president’s shared goal with governors and the private sector, but the cure cannot be worse than the disease,” Deere said.

Trump “certainly does not have the power under any reasonable reading of the Constitution or federalism to order places of worship to open,” said Matthew Dallek, a historian at George Washington University’s Graduate School of Political Management who specializes in the use of presidential power.

But Dallek said that just because Trump doesn’t have the authority to do most of the things he’s threatened, doesn’t mean he won’t, for instance, try to sign executive orders taking such action anyway — even if they are later struck down by the courts.

“What has limited Trump previously? Not very much. So I think he will do whatever seems to be in his best interest at any particular moment,” Dallek said.

Trump, he said, also could try to abuse his powers to leverage other instruments of government, from the Department of Justice to the IRS, to push for investigations or launch regulatory crackdowns to punish states, cities or companies.

Trump also has showed he’s willing to exercise powers that modern presidents have largely avoided, including his recent purging of inspectors general.

When the president declared the pandemic a national emergency back in March, he activated more than 100 different statutory authorities. Yet Trump, said Vladeck, has failed to exercise many of them.

“I think one of the real ironies of this entire moment is that the president actually has a remarkable array of powers that he hasn’t brought to bear. All the while he continues to claim stunning powers that he doesn’t have,” he said.

That includes the Defense Production Act, which Trump could have used far more aggressively to force companies to mass produce supplies including masks and ventilators.

Instead, he used it in more limited ways. And while the Justice Department has threatened to join lawsuits against states that move too slowly, a statement of interest filed by the department in Illinois last week didn’t raise any federal constitutional claims.

Even if he doesn’t follow through on threats, Trump’s statements still can have consequences as he uses his bully pulpit.

“He’s still trying to wield his often outrageous interpretations of the law as a cudgel to bludgeon others,” said Joshua Geltzer, founding executive director of the Institute for Constitutional Advocacy and Protection at Georgetown University Law Center.

Trump is now on a tear against Twitter after the social media platform, which he uses to speak directly to his more than 80 million followers, slapped fact-check alerts on two of his tweets claiming that mail-in voting is fraudulent.

“Twitter is completely stifling FREE SPEECH, and I, as President, will not allow it to happen!” he tweeted Tuesday.

A day later Trump added that: “Republicans feel that Social Media Platforms totally silence conservatives voices. We will strongly regulate, or close them down, before we can ever allow this to happen.”

“This is an attempt by the president to, as we used to say in basketball, work the refs,” he said. “He’s threatening and cajoling with the idea that these folks in their corporate board rooms will think twice about what they’re doing, so they won’t touch him.”

For Rutgers University media professor John Pavlik, who studies online misinformation, Trump is simply trying to fire up his political base.

“For Trump,” he said, “this is about politics.”

Business Insider – President Donald Trump had a vitriolic reaction Wednesday morning to Twitter’s decision to add fact-checking labels to some of his tweets for the first time, accusing Twitter and other tech companies of anti-conservative bias.

Now Trump allies and advisers have found a new target for their ire: Twitter’s head of site integrity, Yoel Roth, who has tweeted harsh criticism of Trump in the past.

Roth’s old tweets from 2016 and 2017 were resurfaced and shared widely on Wednesday, including a tweet calling Trump a “racist tangerine,” a tweet decrying “ACTUAL NAZIS IN THE WHITE HOUSE,” and a tweet describing Senate Majority Leader Mitch McConnell as “a personality-free bag of farts.”

“Fact check: there is someone ultimately accountable for our actions as a company, and that’s me,” Dorsey posted. “Please leave our employees out of this. We’ll continue to point out incorrect or disputed information about elections globally.”

“Per our Civic Integrity policy (https://help.twitter.com/en/rules-and-policies/election-integrity-policy), the tweets yesterday may mislead people into thinking they don’t need to register to get a ballot (only registered voters receive ballots),” Dorsey continued. “We’re updating the link on @realDonaldTrump’s tweet to make this more clear.”