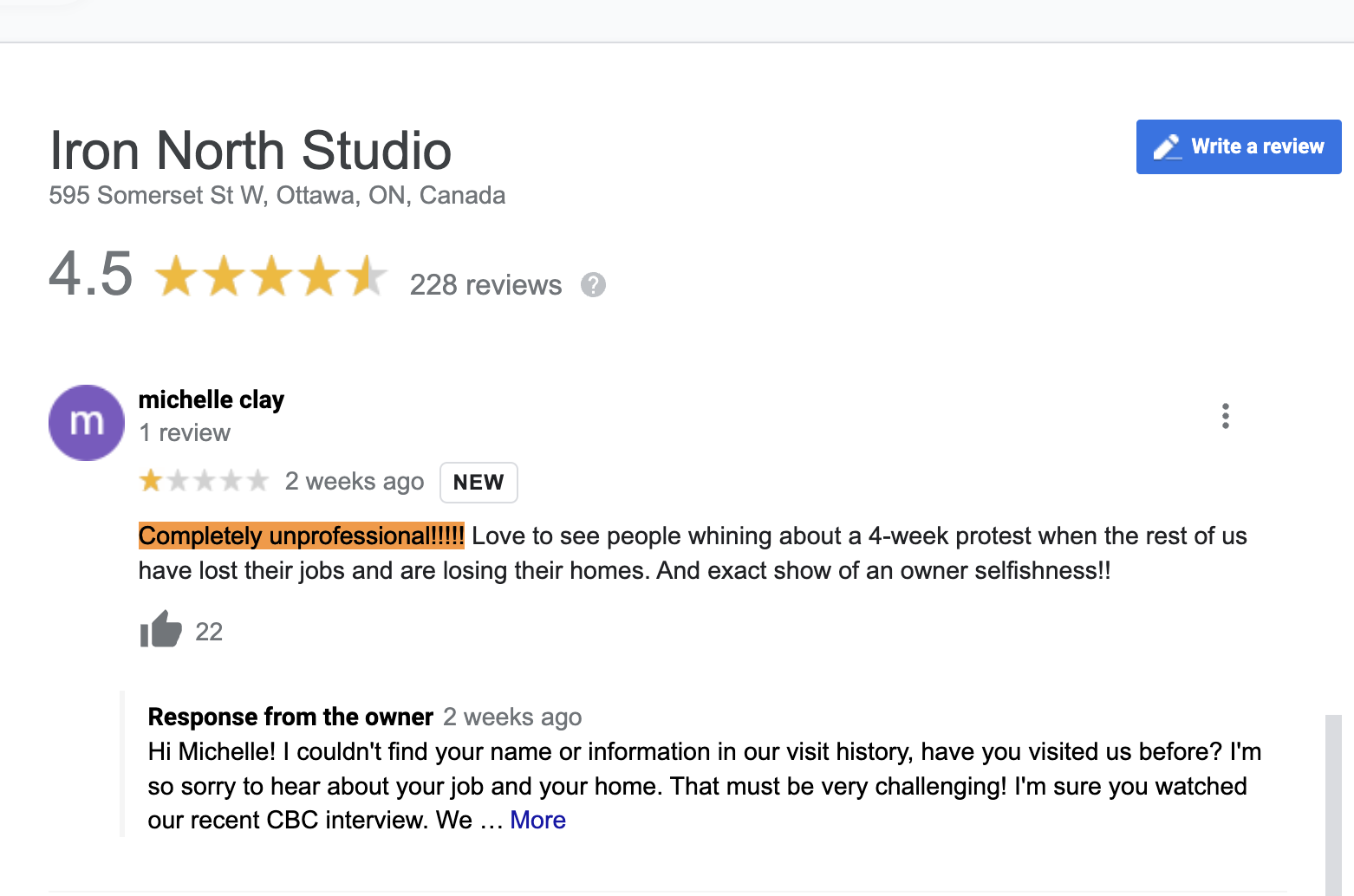 CBC News – Some businesses say their recent interactions with protesters and their decision to continue to require proof of vaccination has left them with baseless one-star Google reviews harming their reputation.

But experts say there are ways to recover — even if Google won’t take the supposed false reviews down.

Ontario lifted most of its major public health restrictions, including COVID-19 proof of vaccination requirements and indoor capacity limits, on Tuesday.

Despite that decision Iron North Studio, a gym in Ottawa’s Centretown neighbourhood, wanted to continue requiring proof of vaccination to better accommodate its immunocompromised clients and those with children — a decision met with some backlash, says its owner.

Since announcing this Monday, Jenna Ladd says the gym has received some one-star Google reviews, which include allegations the business “prefers discrimination over inclusion” and urging people to “go somewhere else that supports freedom!”

“People are smart enough to realize, maybe there’s something else going on here.” – Jonathan Simon, University of Ottawa director of marketing

Ladd expects more online attacks from “internet trolls” as time passes, but says she will respond with kindness, leave the door open to discussion, and report it to Google with as much information and context as possible.

“We’re looking for real experience, negative or positive, that we can actually improve our business on,” she said. “So far, anything negative that comes through, usually our community upholds us with some sort of positive rebuttal.”

Tips from an expert

Those “unfair” and often baseless Google reviews can harm small businesses, according to Jonathan Simon, director of marketing and communications at the University of Ottawa’s Telfer business school.

Simon says people rely more on digital reviews now to make purchases, which can give those one-star ratings more weight.

“We’re in an age where if you’ve got somebody that has a vendetta against you … you got to keep aware of it,” Simon said. “It could be both a blessing or a curse to have online reviews for your business.”

If your business is hit with what you believe is a baseless review, Simon says a business should respond to the review.

Businesses still requiring proof of vaccination risk challenges, constitutional experts say
He believes most people can tell if someone is “maliciously” writing negative reviews, and if a business owner responds with openness to engage with the supposed client using a professional tone, people may be able to tell the reviewer “is just trolling.”

The best way to avoid negative effects of troll reviews, Simon said, is to proactively ask real customers to review the business after providing service — something very few clients do even after having a great experience.

“Later, when those negative reviews show up, all of a sudden, they’ll look out of character compared to all the positive reviews this business has gotten,” Simon said.

“People are smart enough to realize, maybe there’s something else going on here.”

If you’re already receiving one-star reviews, Simon said it’s time to reach out to your current customers to ask them to leave their thoughts. It’s now about increasing the volume of your reviews, he said.

“The more positive reviews you have, the odd time that you get negative reviews, that’ll get drowned out.”

That advice is something Jason Komendat, owner of Retro-Rides and Ottawa Bike Café on Sparks Street, has already put into action.

He recently had two suspicious one-star reviews on Google following an interaction with protesters from the so-called Freedom Convoy in Ottawa.

Komendat said his employee refused to let protesters use their washroom after shop hours.

“Within a day or two, all of a sudden we’re getting a couple of one-star reviews on our Google,” he said. “It’s not a big deal but it hurts a little bit.”

Komendat submitted an appeal and Google said although the two reviewers were from Alberta, the commentless one-star reviews didn’t violate their terms.

He took to social media and shared his story with his clients. Komendat says his customers stepped up to support his business, and left him about 30 five-star reviews.

“There were people like, ‘I can’t believe I never reviewed you guys before!’ So these are real people that we know that stepped up to support us as a business,” said Komendat.

Although he won’t pursue any further appeal of the reviews due to the time it would require, Komendat wants Google to improve the ability to dispute these reviews with more ease and clarity.