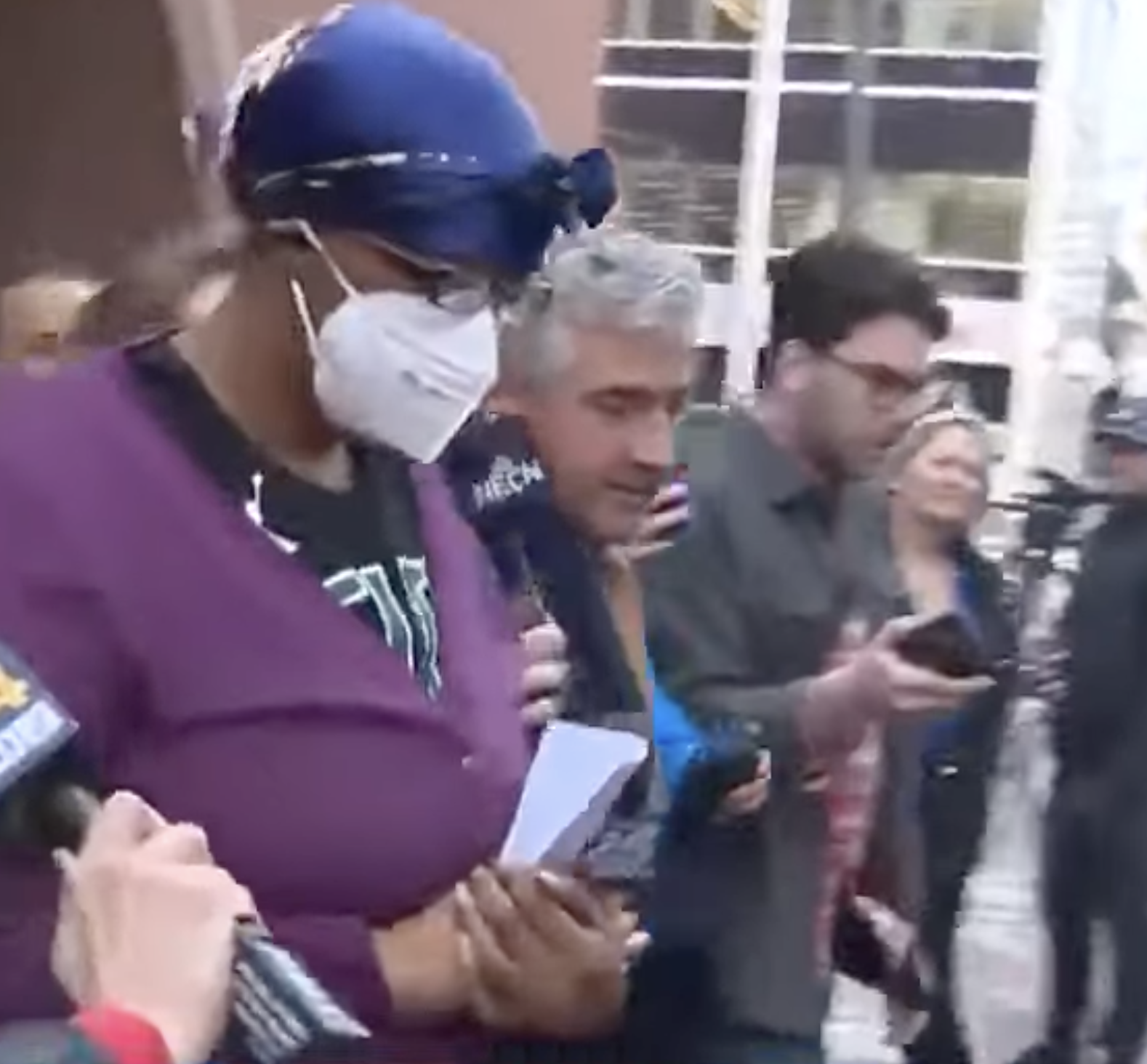 Monica Cannon-Grant organized a march in Boston that drew thousands to protest the killing of George Floyd emerged as a prominent figure in the Black Lives Matter movement ...

A prominent community organizer and founder of a nonprofit created to help survivors of violence in Boston was arrested Tuesday at her Taunton home on federal charges that she and her husband spent grants and donations on personal expenses.

Those expenses include her mortgage, rent on her Boston apartment, and a car for a relative.

Monica Cannon-Grant, 41, who runs Violence in Boston Inc., and her husband, Clark Grant, 38, also are charged in an 18-count indictment with wrongly collecting an estimated $100,000 in pandemic unemployment benefits and lying on a mortgage application.

The indictment says the couple raised more than $1 million in grants and donations for the charity from 2017 to 2021.

In 2017, when Cannon-Grant had zero money in her personal bank account, a department store awarded her a $10,400 grant “to be used to purchase meals for needy children in the Boston Public school system.” However, Cannon-Grant had the money deposited into a personal account and the couple used $3,111 of the grant money to pay rent on their Boston apartment.

The indictment also charges Cannon-Grant with one count of mail fraud.

The indictment marks the first time Cannon-Grant has been implicated in the fraudulent schemes and brings additional charges against her husband, who was arrested in October by federal agents who raided their home … READ MORE.

BOSTON – The founders of a local nonprofit, Violence in Boston (VIB), have been indicted by a federal grand jury in connection with a series of alleged schemes designed to defraud VIB and its donors, the Massachusetts Department of Unemployment Assistance and a mortgage lending business based in Chicago.

Cannon-Grant was arrested this morning and will make her initial appearance in federal court in Boston later today. Grant was previously charged by criminal complaint in October 2021 with one count of wire fraud and one count of false statements on a loan and credit application. An arraignment date for Grant has not yet been scheduled by the Court.

Cannon-Grant is the founder and CEO of VIB, an anti-violence nonprofit formally established in 2017, the stated purpose of which is to reduce violence, raise social awareness and aid community causes in Boston, among other purposes. Grant is Cannon-Grant’s husband, a founding director of VIB, and until recently a full-time employee for a commuter services company since July 2018.

The indictment alleges that the defendants conspired to use VIB as a vehicle to solicit and receive charitable contributions from institutional and individual donors that they then used for a wide range of personal expenses and to enrich themselves while concealing such expenditures from VIB directors, officers and others. Specifically, from 2017 through at least 2020, it is alleged that Cannon-Grant and Grant exercised exclusive control over VIB financial accounts and diverted VIB money to themselves through cash withdrawals, cashed checks, debit purchases and transfers to their personal bank accounts.

On numerous occasions between 2017 through 2021, Cannon-Grant allegedly applied for public and private funded grants and donations in which she represented the funds were to be used for VIB charitable purposes. However, it is alleged that Cannon-Grant and Grant used grant and donation money to pay for personal expenses including, among other things, hotel reservations; groceries; gas; car rentals; auto repairs; Uber rides; restaurants; food deliveries; nail salons; and personal travel. The defendants did not disclose to other VIB directors or VIB’s bookkeepers or financial auditors that they had used VIB funds for such payments.

The defendants also allegedly conspired to defraud the Massachusetts Department of Unemployment Assistance (DUA) by collecting Pandemic Unemployment Assistance (PUA) benefits while at the same time collecting income from a variety of sources, including VIB funds utilized for Cannon-Grant and Grant’s personal expenses, consulting fees paid to Cannon-Grant, compensation paid directly by VIB to Cannon-Grant, and the annual salary paid to Grant by his employer for his full-time job. According to the indictment, beginning in or about May 2020 through 2021, Grant and Cannon-Grant fraudulently applied for PUA benefits, created by Congress in the wake of the COVID-19 pandemic, that they knew they were not eligible to receive. The defendants allegedly coordinated the submission of false online applications and certifications for PUA funds, concealed their income, used the fraudulently obtained PUA funds to pay for their joint household expenses and other personal expenditures, and created and submitted phony documentation in order to continue receiving weekly PUA COVID-19 benefits.

Additionally, the defendants allegedly conspired to defraud an Illinois-based mortgage lender when applying for a home mortgage loan in July 2021. Specifically, it is alleged that from in or about May 2021 through July 2021, Grant and Cannon-Grant submitted to the mortgage lender false information and fraudulent documentation that represented VIB assets as personal assets and concealed the fraudulent nature of Grant’s PUA income, as well as the fraudulent nature of gift funds Grant received in order to help pay for mortgage fees and closing costs.

If you have information pertaining to the crimes alleged against the defendants, you may contact the U.S. Attorney’s Office for the District of Massachusetts at: (617) 748-3663.

On May 17, 2021, the Attorney General established the COVID-19 Fraud Enforcement Task Force to marshal the resources of the Department of Justice in partnership with agencies across government to enhance efforts to combat and prevent pandemic-related fraud. The Task Force bolsters efforts to investigate and prosecute the most culpable domestic and international criminal actors and assists agencies tasked with administering relief programs to prevent fraud by, among other methods, augmenting and incorporating existing coordination mechanisms, identifying resources and techniques to uncover fraudulent actors and their schemes, and sharing and harnessing information and insights gained from prior enforcement efforts. For more information on the Department’s response to the pandemic, please visit https://www.justice.gov/coronavirus.

Anyone with information about allegations of attempted fraud involving COVID-19 can report it by calling the Department of Justice’s National Center for Disaster Fraud (NCDF) Hotline at 866-720-5721 or via the NCDF Web Complaint Form at: https://www.justice.gov/disaster-fraud/ncdf-disaster-complaint-form.

The details contained in the indictment are allegations. The defendants are presumed innocent unless and until proven guilty beyond a reasonable doubt in a court of law.