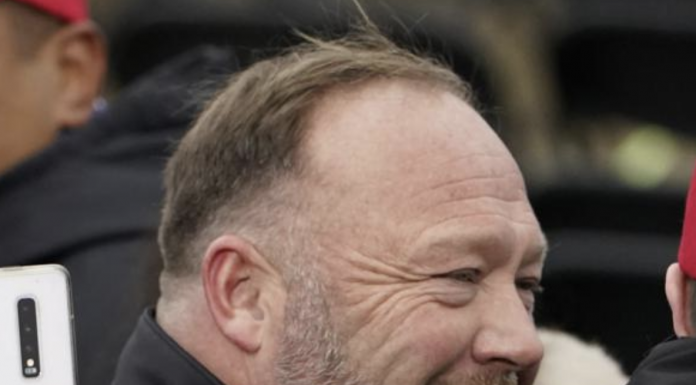 Alex Jones said his wife’s arrest “doesn’t concern my politics” and that “it wasn’t some kind of personal hateful thing or anything.”

DALLAS (AP) — The wife of conspiracy theorist Alex Jones was arrested Christmas Eve on a domestic violence charge that the right-wing provocateur said stems from a “medication imbalance.”

Sheriff’s deputies took Erika Wulff Jones into custody and booked her into an Austin jail around 8:45 p.m. Friday.

Jail records show the 43-year-old faces misdemeanor charges of assault causing bodily injury to a family member and resisting arrest, search or transport. She had not received a bond Saturday afternoon.

Alex Jones, an Austin resident and founder of the right-wing media group Infowars, declined Saturday to say whether he’d been injured or elaborate on what happened beyond that he believes it was related to his wife’s recent change of medication.

Jones told The Associated Press in a brief interview:

“It’s a private family matter that happened on Christmas Eve. I love my wife and care about her and it appears to be some kind of medication imbalance.”

The Travis County Sheriff’s Office did not immediately respond to a request Christmas Day for the report on Wulff Jones’ arrest and a spokeswoman said she could not provide more information.

An attorney for Wulff Jones did not immediately respond to a request for comment.

Jones sued this week seeking to block subpoenas he’d been issued by the House committee investigating the Jan. 6 insurrection at the U.S. Capitol.

Jones spoke at a rally in support of then-President Donald Trump that proceeded the riot and his Infowars colleague, Owen Shroyer, was charged with crimes related to it in August. Shroyer has said he’s “innocent of the charges.”