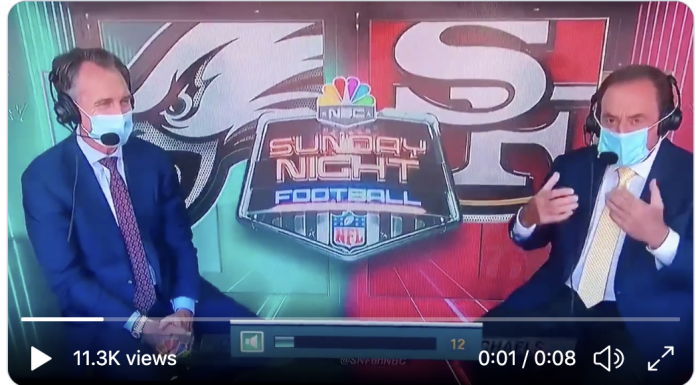 “We’ll get rid of these things as soon as we possibly can.” – Al Michaels

NEW YORK DAILY NEWS – Al Michaels and Cris Collinsworth were forced to wear a mask at work for a few hours on Sunday night for the 49ers-Eagles broadcast.

Michaels introduced the duo by saying “Santa Clara County officials have compelled us to wear masks, so that is the story.”

When he threw it to Collinsworth, the analyst grumbled “I don’t know who I am.”

Jeffrey Smith, the Santa Clara official in question, confirmed it to the San Francisco Chronicle. “We wouldn’t want them to end up like the president,” he said.

Michaels is a known conservative; his stance was unsurprising, if off-putting. “We’re good boys, though,” Michaels said. “We’re going to get lollipops at the end of the game tonight.”

Collinsworth kept griping too, at one point complaining that his ears hurt … Read more.

NEW NFL RULE: Respect The Mask Or Else