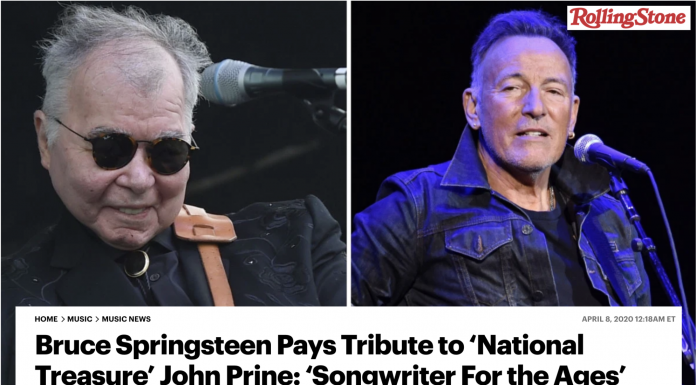 “If God’s got a favorite songwriter, I think it’s John Prine.” – Kris Kristofferson

CNN – John Prine, the raspy-voiced singer-songwriter whose homespun, witty and insightful country-folk tunes influenced legions of musicians in a career that spanned five decades, died Tuesday in Nashville. He was 73.

Prine was hospitalized and intubated last month after a “sudden onset” of coronavirus symptoms, according to a family statement posted on his verified Twitter account.

The unassuming Prine never had a hit single or a blockbuster album. But he built a devoted following, won several Grammys and overcame two bouts of cancer to record and tour into his 70s.

“He is singing with the angels,” singer Sheryl Crow wrote on Twitter. “You will be missed but your songs will live on.”

Johnny Cash, in his memoir, named Prine as one of his four key songwriting inspirations. Bob Dylan, in a 2009 interview, said, “Prine’s stuff is pure Proustian existentialism … and he writes beautiful songs.”

“Over here on E Street, we are crushed by the loss of John Prine.” – Bruce Springsteen

“There’s a huge hole in the music world tonight. John did it best,” country singer Toby Keith wrote on Twitter.

Prine grew up in a blue-collar suburb of Chicago and was famously working as a postal carrier when his musical career took off in 1970.

He was singing on open-mic nights at a Chicago bar when Roger Ebert, then a young reporter for the Sun-Times, heard him play and wrote a favorable review, dubbing him the “Singing Mailman.”

People began lining up to hear him play, and one famous early fan, singer-songwriter Kris Kristofferson, helped him get a record deal.

“John and I were ‘New Dylans’ together in the early 70s and he was never anything but the loveliest guy in the world,” Bruce Springsteen wrote on Twitter following Prine’s death. “A true national treasure and a songwriter for the ages … ” Read more.

NEW YORK (AP) — Some people, the songs just come out of them. For nearly half a century, they tumbled out of John Prine like nothing.

His songs — compassionate, funny, sage — make up an American songbook that would be staggeringly intimidating if it wasn’t so warm and welcoming.

He began — with a dare at an infamous open mic — a fully formed songwriter who through calamity and cancer never once wavered in his wry, homespun humanism. He was, anyone would say, as good as they come.

Prine was raised in the blue-color suburbs of Chicago by parents from Western Kentucky.

He learned guitar from his brother. He was a mailman for a time, writing lyrics as he delivered letters. The first song he performed — when coaxed onto that Chicago open-mic stage — was “Sam Stone.” It remains one of Prine’s most heartbreaking songs.

In it, he sings with a deadpan hopelessness about the fate of a drug-addicted veteran: “There’s a hole in daddy’s arm where all the money goes/Jesus Christ died for nothin’, I suppose.”

In songs that straddled Nashville country and Appalachia folk and fell somewhere in between Johnny Cash and Bob Dylan, Prine sang about characters like Sam Stone.

The lonely housewife of “Angel From Montgomery.” The elderly couple of “Hello in There.” He did so with humor and understanding, and a keen Mark Twain eye that saw us all for what we are — and loved us anyways.

On “Far From Home,” Prine, who grew up next to a junkyard, sang: “Ain’t it funny how an old broken bottle/ Looks just like a diamond ring?”

Picking only a handful of songs by Prine is an errand that even a fool wouldn’t dare. But here’s trying.