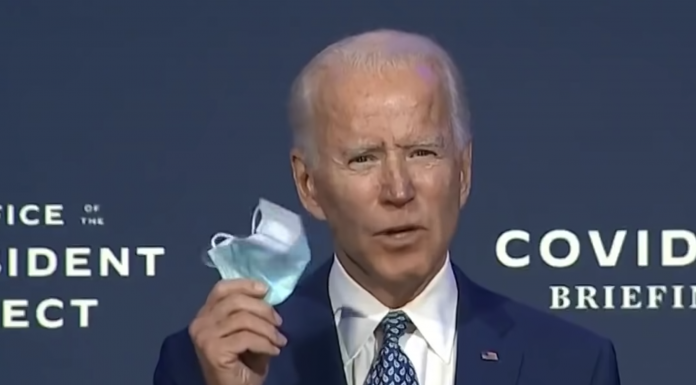 Fox News – Joe Biden has laid out several ways to combat the coronavirus, including a national mask mandate — but for now, not every state has committed to help.

While the majority of America’s governors already have issued statewide mask requirements, 16 states have not — and nearly half of their governors have suggested they would defy orders from the Biden administration to implement such a mandate.

Fox News reached out to governors’ offices across the country to ask if they’d help enforce a mask mandate:

Alaska – Alaska’s governor did not respond to a request for comment, but the state currently does not have a mandate in place regarding masks. Gov. Mike Dunleavy, a Republican, has previously resisted imposing one and maintains that such decisions are best made by local governments.

Arizona –Arizona’s governor’s office, which did not respond to a request for comment, has not installed a mask requirement in the state. Biden previously blamed Republican Gov. Doug Ducey for Arizona’s rise in coronavirus cases in June.

Florida – Florida’s governor’s office did not respond to a request for comment. The state has never imposed a statewide mandate. Several Republican lawmakers suggested this week it was unlikely to happen, even if Biden reaches out to Republican Gov. Ron DeSantis.

Georgia – The Peach State does not have a mandate in place, although Georgians are “strongly encouraged” to wear face coverings when possible. Republican Gov. Brian Kemp’s office did not respond to a request for comment.

Idaho – Republican Gov. Brad Little’s office did not respond to a request for comment. The state’s biggest cities currently require masks in public, but there is no statewide mandate.

Iowa – Republican Gov. Kim Reynolds, whose office did not answer a request for comment, has previously said that cities and counties do not have the authority to enact mask mandates.

Mississippi – Mississippi Gov. Tate Reeves, a Republican, told Fox News that pressure from the Biden administration for the state to adopt a mask mandate would “have no impact.”

Missouri – Several cities and counties in Missouri have enacted mask mandates, but there is no statewide requirement. Republican Gov. Mike Parson’s office did not respond to a request for comment.

Nebraska – During a press conference this week, Gov. Pete Ricketts, a Republican, said that he would not implement a mandate if asked to do so by the president-elect.

New Hampshire – Gov. Chris Sununu, a Republican, who was overwhelmingly re-elected last week thanks in part to his strong approval rating on the coronavirus, told Fox News that he supported allowing local communities to make their own decisions regarding a mandate.

North Dakota – The North Dakota governor’s office declined to comment. The state currently does not have a mask mandate in place.

Oklahoma – Gov. Kevin Stitt, a Republican, has resisted calls for a statewide mask mandate. His office did not respond to a request for comment this week.

South Carolina – Gov. Henry McMaster, a Republican, has been clear from the beginning of the pandemic: he will not issue an unenforceable statewide mandate.

South Dakota – South Dakota recommends that individuals wear a face covering in public, but it has not made masks mandatory. The governor’s office did not respond to a request for comment.

Tennessee – Several jurisdictions in Tennessee have adopted mask mandates, but the state has not done so. The governor’s office did not respond to a request for comment.

Wyoming – Wyoming does not have a mask requirement in place and has said installing such a mandate is the state’s decision — not the federal government’s. “I believe any decision on a statewide mask mandate would be Wyoming’s to make,” Gov. Mark Gordon, a Republican, said in a statement to Fox News … Read more.

Florida Phoenix – As new daily cases of COVID-19 hit record highs across the nation this week, Florida remains an outlier by not requiring its people to wear face masks in public.

Florida is one of just 16 states that don’t impose a statewide mask mandate.

Sen. Lori Berman, a Palm Beach County Democrat, said Tuesday she will continue to push for mask mandates but does not expect Florida Gov. Ron DeSantis, a Republican and fervent Trump ally, to relent in his opposition to them.

DeSantis lifted all statewide COVID restrictions on Sept. 25 and banned local governments from enforcing their mask mandates against individuals. (Municipalities may continue to enforce masking requirements among businesses and organizations.)

ICYMI: 13 Things Happen When You Get Coronavirus (Some In Just 2 Days)

“Our governor has been on the wrong side of this from the beginning. I wish he would heed the experts. Look at Utah. They just imposed a state mandate yesterday [after a 15 percent increase in cases]. I hope we don’t have to get that bad before our governor will act.”

Berman noted the irony of Florida’s Republican-controlled Senate and House of Representatives convening in their first legislative sessions next week under requirements that they wear masks, test negative for COVID-19, maintain safe distances, and submit to fever checks. Berman said”

“The things we’re doing in the Legislature are not being required at the top of the state for all other Floridians.”

Florida’s death toll is 17,248 residents and 212 non-residents, representing about 7.3 percent of the national death toll of at least 239,500, according to data published by the Florida Department of Health, the COVID Tracking Project, and the New York Times’ tracking analysis … Read more.