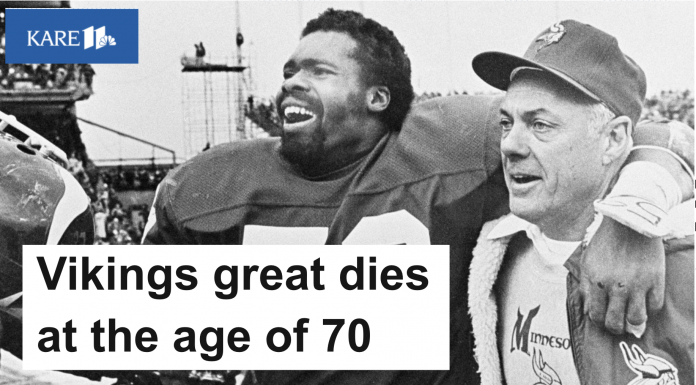 Fox News – Matt Blair, a former Minnesota Vikings standout linebacker from in the 1970s and 1980s, died Thursday. He was 70.

Blair’s death was believed to be from chronic traumatic encephalopathy (CTE), which is the neurodegenerative brain disease linked to playing football and having a number of concussions, according to the Minneapolis Star Tribune.

Scott Studwell, a former teammate of Blair’s, told the newspaper the linebacker had been suffering.

“He’d been suffering for a while, so I guess maybe it’s a blessing in disguise,” Studwell said. “But it’s still too young. It’s a sad day.”

Blair received the diagnosis in 2015 that he had early signs of dementia likely caused by CTE. And because he had the disease, his dementia would grow quickly.

He is reportedly believed to have had Alzheimer’s disease toward the end of his life.

In his glory days, Blair was a stud linebacker for the Vikings. The team selected him in the second round of the 1974 draft out of Iowa State. He was a six-time Pro Bowler and one-time First-Team All-Pro.

Albert Matthew Blair (September 20, 1950 – October 22, 2020) was an American professional football player who was an outside linebacker for the Minnesota Vikings of the National Football League (NFL) for all 12 seasons of his career from 1974 to 1985.

College career
Blair walked onto the Northeastern Oklahoma A&M football team and was a member of the 1969 Junior College Championship squad. He was able to earn a half scholarship through football but had to join the basketball team to receive his other half scholarship. Blair was recruited by Florida, Florida State, Alabama, and Iowa State, among others. After a visit by Johnny Majors, Blair ultimately committed to Iowa State.[1]

While at Iowa State, Blair was a two time letter winner. He was a member of ISU’s 1971 Sun Bowl team and was named the bowl’s most outstanding defensive player despite ISU’s loss. After sitting out the 1972 season with a knee injury, he rebounded with an outstanding senior campaign in 1973. Blair earned All-America honors,[2] tallying 77 tackles, one interception and three fumble recoveries. He was invited to play in the Hula Bowl, East-West Shrine Game, and the Senior Bowl.[3]

Blair was a selected by the Minnesota Vikings in the second round of the 1974 NFL Draft with the 51st overall selection.

He was also an exceptional special teams player, particularly in blocking punts because of his great speed and timing abilities. Blair is 3rd in NFL history with 20 blocked kicks.

Blair appeared in two Super Bowls with the Vikings, Super Bowl IX (1974 season) and Super Bowl XI (1976 season), and both were losses respectively to the Pittsburgh Steelers and the Oakland Raiders.

Blair started for the Vikings his rookie season replacing the injured Roy Winston. Blair participated in special teams play in Super Bowl IX, blocking Bobby Walden’s punt, recovered by Terry Brown in the endzone, the Vikings’ only points all day, as they missed the extra point.

In particular, Blair recovered 5 fumbles and intercepted 2 passes from his linebacker position with Jeff Siemon in the middle and Wally Hilgenberg on the opposite side. The Vikings defeated the Rams again in the NFC championship game of the 1976-77 NFL playoffs, when Blair recovered 2 fumbles.

In a 2015 interview, Blair revealed that he had been showing early signs of dementia. He said that he was told by his neurologist that the symptoms were likely the result of chronic traumatic encephalopathy (CTE), a degenerative brain disease linked to concussions.[9]

Blair died on October 22, 2020 at the age of 70.[10] His cause of death was not immediately announced, but Blair had been dealing with complications from dementia in recent years.[11]