52 Dogs Rescued From China Meat Trade Arrive In US 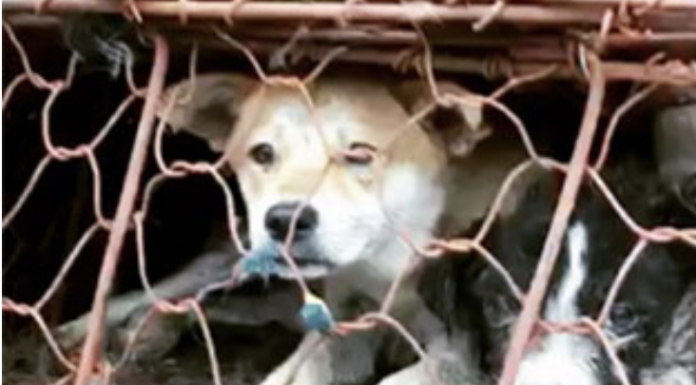 NEW YORK POST – Dozens of pups saved from potentially ending up in the Chinese dog meat trade have arrived in the Big Apple en route to their forever families.

Fifty-two rescue dogs landed from Beijing on a plane Friday morning at JFK Airport, where some of their new owners were ready to greet them.

The pooches were brought over by No Dogs Left Behind, a rescue organization that runs a shelter in Beijing.

Another is set to touch down Saturday morning carrying more dogs.

The rescue organization said it has saved thousands of furry friends by targeting slaughterhouses, wet markets, traffickers and illegal breeders across China …

What Is “No Dogs Left Behind”?

No Dogs Left Behind leads the way in the global war against animal cruelty. We operate boots on the ground in China, fighting on the front lines to rescue dogs from the illegal dog-meat trade.

Our mission extends beyond borders worldwide, advocating for the creation and enforcement of animal welfare laws, and raising awareness for a cruelty-free, sustainable world in which no animal is violated, exploited, tortured or slaughtered for commercial goods or profit.

With nearly 500 survivors in our care, No Dogs Left Behind operates sanctuaries in Dayi and Gongyi, China.

In these safe havens, these once victimized and exploited dogs receive medical care, nutritional support and rehabilitation on an ongoing basis.

No Dogs Left Behind goes beyond rescue, doing whatever it takes to heal the physical and emotional scars these animals suffer, and to find them their forever loving homes. Click Here to meet our brave survivors. Learn more.