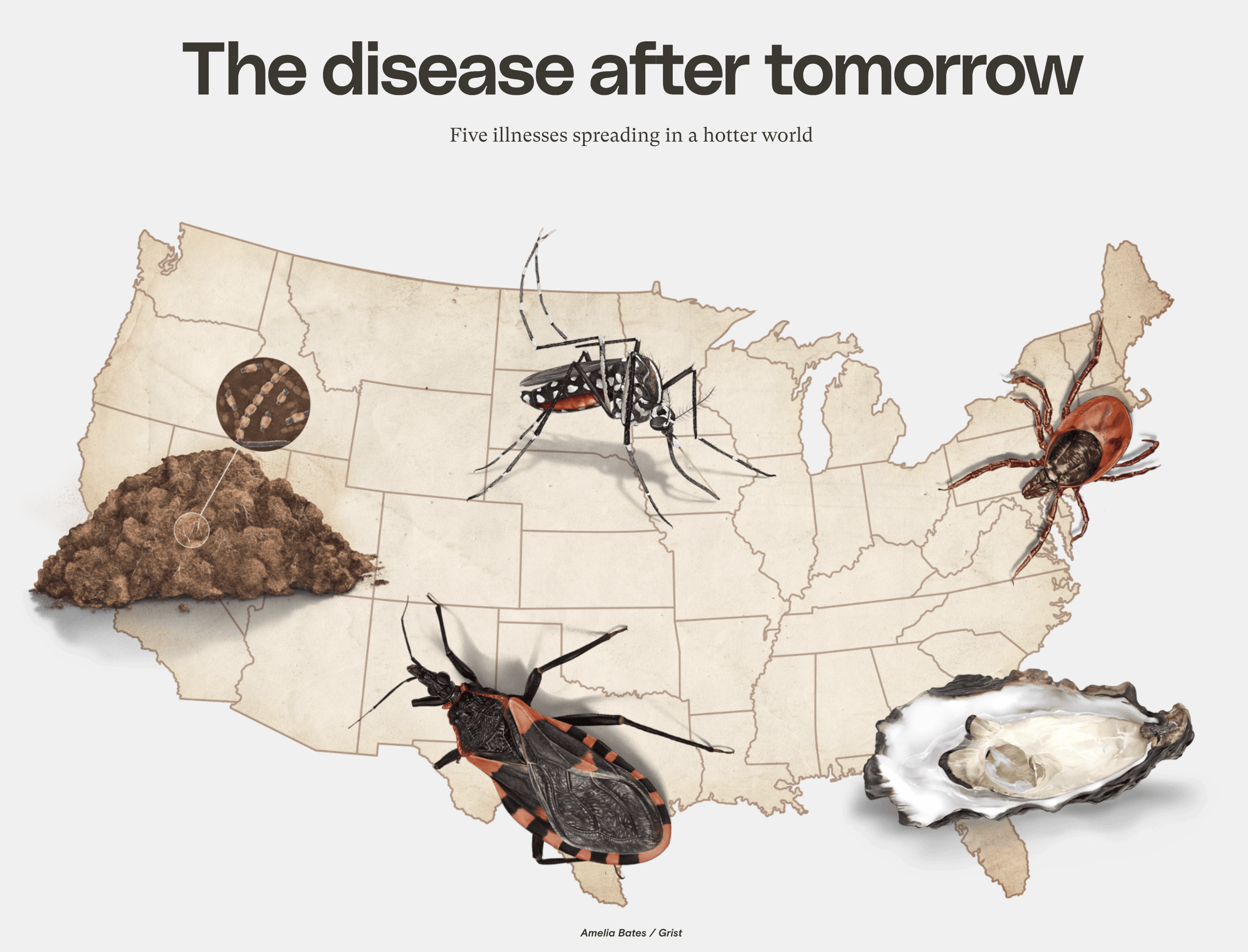 Powassan virus, or POWV, is a rare, tick-borne illness that infected just 134 people in the U.S. between 2016 and 2020. That may not sound like a lot, but it represents a more than 300 percent increase from the previous five-year period.

The virus causes a neuroinvasive disease that has no treatment, vaccine, or cure. Early symptoms include headache, fever, nausea, and weakness — similar to other tick-borne illnesses.

But Powassan is different from most tick diseases because it has an extremely high mortality rate: One in 10 people who develop the acute form of the illness die. Half of those who survive a severe bout of Powassan have long-term health issues such as recurring headaches, loss of muscle mass and strength, and memory problems.

In May, an elderly woman in Connecticut died weeks after contracting the Powassan virus, the second fatality caused by the illness in the U.S. this year.

Historical range: Powassan virus has mainly been found around the Great Lakes and in the Northeast, but, between 2016 and 2020, cases were reported as far away from those regions as North Dakota and North Carolina.

“Roughly 50 percent of those who recover from an acute Powassan infection have some kind of long-lasting, if not permanent, debilitation.” — Rick Ostfeld, tick researcher at the Cary Institute of Ecosystem Studies

Solutions: There is no vaccine or cure available for people who contract Powassan virus.

The stakes: The virus that causes chikungunya is still rare in the U.S., but experts at the CDC are watching it extremely closely because the illness has the potential to spread at blinding speeds. The first case of chikungunya in the Western Hemisphere was discovered in 2013 in the Caribbean. By 2014, it had become an epidemic in Jamaica, and an outbreak of 107 cases had been documented in Florida. By 2017, more than 1 million people had been infected in the Americas. Some 80 percent of the Jamaican population may have been infected.

Symptoms include fever, debilitating joint pain, muscle pain, headache, nausea, fatigue, and rash. Death from chikungunya is rare and mostly occurs in severely immunocompromised patients. Severe joint pain can persist for months and even years in some cases.

Historical range: Chikungunya fever was first identified in Tanzania in the 1950s, remained relatively rare for half a century, and then exploded into more than 60 countries throughout Asia, Africa, Europe, and the Americas after 2004. Since 2014, cases of the virus in the U.S. have been identified in Florida, Texas, Puerto Rico, and the U.S. Virgin Islands. Most of those cases were acquired after travel to countries where chikungunya is more prevalent.

“We are not prepared.” — Charles Ben Beard, deputy director of the CDC’s division of vector-borne diseases

Solutions: Chikungunya has no vaccine or cure.

Carried by uncooked shellfish such as clams, mussels, and oysters

The stakes: Vibrio is a marine bacterium that lives in the salt and brackish waters of estuaries around the globe. Different strains of Vibrio can cause infections of varying severity. Vibrio vulnificus is a particularly dangerous variant.

Shellfish can accumulate high concentrations of Vibrio and then pass that dose on to humans if consumed raw. Humans can also be infected with Vibrio when swimming in water with an open wound. When it infects humans via an open wound, Vibrio vulnificus can end up causing necrotizing fasciitis, or flesh-eating disease. If the bacteria is ingested orally, it enters the bloodstream and can cause large pus-filled lesions on the extremities. The chance of death following a wound-acquired Vibrio vulnificus infection is 25 percent. That number doubles with food-borne infections. Immunocompromised people are particularly at risk.

Historical range: Vibrio vulnificus is found in the Gulf of Mexico and, more recently, along much of the East and West Coasts.

“If you feel bad when you go to bed, by the time you wake up you could be ready for amputation, so don’t sleep on it. Go to the doctor as soon as you feel ill.” — Brett Froelich, assistant professor of microbiology at George Mason University

Solutions: Antibiotics can knock out vibriosis, but only if they’re administered early in the infection.

The stakes: Kissing bugs are bloodsucking insects that often attach themselves to the soft skin around the mouths of humans, dogs, and other animals. But Chagas isn’t spread by the bloodsucking itself. When kissing bugs feed — at night when people are sleeping — the bugs defecate. People tend to rub the kissing bug’s feces into their mouths by accident either in their sleep or when they wake, inadvertently infecting themselves with Trypanosoma cruzi, the parasite that causes Chagas.

In the weeks and months after infection, symptoms can include fever or swelling. If Chagas is left untreated, it becomes chronic. An estimated 20 to 30 percent of people with chronic Chagas develop life-threatening complications such as a dilated heart that can’t pump enough blood, life-threatening gastrointestinal issues, and cardiac arrest … READ MORE.