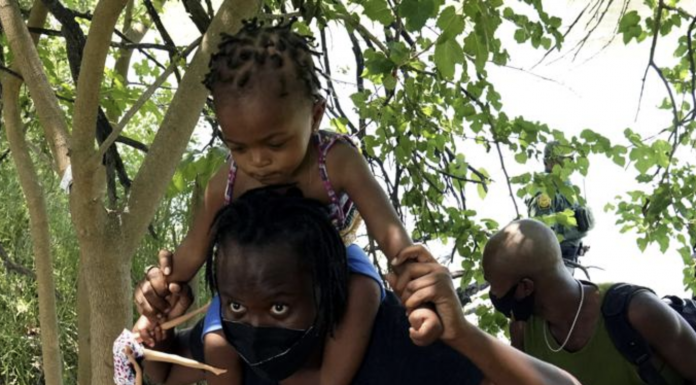 Venezuelan migrants are crossing the US border in droves. While some are government opponents, the vast majority are escaping long-running economic devastation marked by blackouts and shortages of food and medicine.

DEL RIO, Texas (AP) — Marianela Rojas huddles in prayer with fellow migrants after trudging across a slow-flowing stretch of the Rio Grande and nearly collapsing when she stepped on American soil for the first time.

“I won’t say it again,” interrupts a U.S. Border Patrol agent, giving orders in Spanish for Rojas and a group of 14 other Venezuelans to get into a detention van. “Only passports and money in your hands. Everything else — earrings, chains, rings, watches — in your backpacks.”

It’s a frequent scene across the U.S.-Mexico border at a time of swelling migration. But these aren’t farmers and low-wage workers from Mexico or Central America, who make up the bulk of those crossing.

Among them are bankers, doctors and engineers from Venezuela, and they’re arriving in record numbers as they flee turmoil in the country with the world’s largest oil reserves and pandemic-induced pain across South America.

Two days after Rojas crossed, she left detention and got a bus out of the Texas town of Del Rio. The 54-year-old fled hardship in Venezuela a few years ago, leaving a paid-off home and career as an elementary school teacher for a fresh start in Ecuador.

“Since 2017, residents [of Venezuela] have lost an average of 24 pounds per person.” – CATHOLIC RELIEF SERVICES

But when the housecleaning work she found dried up, she decided to uproot again.

“It’s over, it’s all over,” she said on the phone to loved ones. “Everything was perfect. I didn’t stop moving for one second.”

Last month, 7,484 Venezuelans were encountered by Border Patrol agents along the U.S.-Mexico border — more than all 14 years for which records exist. The surprise increase is a harbinger of a new type of migration that has caught the Biden administration off guard: pandemic refugees.

Many of the nearly 17,306 Venezuelans who have crossed the southern border illegally since January had been living for years in other South American countries, part of an exodus of millions since President Nicolás Maduro took power in 2013.

With the pandemic still raging in parts of South America, they relocated again.

“The truth is, it’s better to wash toilets [in the U.S.] than being an engineer [in Venezuela].” – Lis Briceno, 27, Venezualan petroleum engineer

Increasingly, they’re being joined at the U.S. border by people from the countries they initially fled to — like Ecuador and Brazil — as well as far-flung nations hit hard by the virus, like India and Uzbekistan.

Compared with other migrants, Venezuelans garner certain privileges — a reflection of their firmer financial standing, higher education levels and U.S. policies that have failed to remove Maduro but nonetheless made deportation all but impossible.

The vast majority enter the U.S. near Del Rio, a town of 35,000, and don’t evade detention but turn themselves in to seek asylum.

Like many of the dozens of Venezuelans The Associated Press spoke to this month in Del Rio, 27-year-old Lis Briceno had already migrated once before. After graduating with a degree in petroleum engineering, she couldn’t get hired in the oil fields near her hometown of Maracaibo without declaring her loyalty to Venezuela’s socialist leadership. So she moved to Chile a few years ago, finding work with a technology company.

But as anti-government unrest and the pandemic tanked Chile’s economy, her company shuttered. Briceno sold what she could to raise the $4,000 needed to get to the U.S.

“Venezuela is facing a severe humanitarian emergency, with millions unable to access basic healthcare and adequate nutrition. Limited access to safe water in homes and healthcare centers has contributed to the spread of Covid-19.” – Human Right Watch

“I always thought I’d come here on vacation, to visit the places you see in the movies,” Briceno said. “But doing this? Never.”

While Central Americans and others can spend months getting north, most Venezuelans reach the U.S. in as little as four days.

“This is a journey they’re definitely prepared for from a financial standpoint,” said Tiffany Burrow, who runs the Val Verde Border Humanitarian Coalition’s shelter in Del Rio, where migrants can eat, clean up and buy bus tickets to U.S. cities.

They first fly to Mexico City or Cancun. Smugglers promoting themselves as “travel agencies” on Facebook claim to offer hassle-free transport to the U.S. for about $3,000.
The steep price includes a guided sendoff from Ciudad Acuna, where the bulk of Venezuelans cross the Rio Grande and which had been largely spared the violence seen elsewhere on the border.

“[T]he larger lesson of Venezuela’s catastrophe should be learned. Twenty years of socialism … led to the ruin of a nation.” – Bret Stephens, Opinion Columnist, “Yes, Venezuela Is a Socialist Catastrophe,” The New York Times, Jan. 25, 2019

“If you’re a smuggler in the business of moving a commodity — because that’s how they view money, guns, people, drugs and everything they move, as a product — then you want to move it through the safest area possible charging the highest price,” said Austin L. Skero II, chief of the U.S. Border Patrol’s Del Rio sector.

Once in the U.S., Venezuelans tend to fare better than other groups. In March, Biden granted Temporary Protected Status to an estimated 320,000 Venezuelans, protecting them from deportation and allowing them to work legally.

Also, Venezuelans requesting asylum — as almost all do — tend to succeed, partly because the U.S. government corroborates reports of political repression. Only 26% of asylum requests from Venezuelans have been denied this year, compared with an 80% rejection rate for asylum-seekers from poorer, violence-plagued countries in Central America, according to Syracuse University’s Transactional Records Access Clearinghouse.

“I can write their asylum requests almost by heart,” said Jodi Goodwin, an immigration attorney in Harlingen, Texas, who has represented over 100 Venezuelans. “These are higher-educated people who can advocate for themselves and tell their story in a chronological, clean way that judges are accustomed to thinking.”

Even Venezuelans facing deportation have hope. The Trump administration broke diplomatic relations with Maduro in 2019, so air travel is suspended, even charter flights, making removal next to impossible.

Briceno said that if she had stayed in Venezuela, she would earn the equivalent of $50 a month — barely enough to scrape by.

“The truth is,” Briceno said, “it’s better to wash toilets here than being an engineer over there.”

CATHOLIC RELIEF SERVICES – Since 2015, Venezuela has been facing an economic and social crisis. The drastic fall in the price of oil, the country’s main export, led to food shortages, hyperinflation, the collapse of the health system, and social unrest.

Food shortages have had an especially devastating impact. Since 2017, residents have lost an average of 24 pounds per person. Caritas Venezuela monitored 15,000 children under age 5 last year and found 65 percent showed signs of being malnourished. Another 13 percent are living with acute malnutrition.

Hyperinflation in Venezuela has extinguished the middle class, pushing 87% of the population below the poverty line, aggravating violence and internal crime, and unleashing a massive migratory wave, the largest in Latin American history.

More than 3 million Venezuelans have fled to other countries, according to UN Refugee Agency (UNHCR). A majority are in Latin America and the Caribbean, with Colombia hosting the largest number given its proximity to Venezuela. Refugees also flee to Ecuador and Peru, crossing thousands of miles of cold Andean mountain passes.

Peru, however, has gone from accepting more than 5,000 Venezuelan refugees daily, to establishing a more restrictive passport requirement for entry.

The needs facing Venezuelans inside their country, and in nearby countries of refuge, are dire—and largely dependent upon critical humanitarian aid and care made available to them. SOURCE.