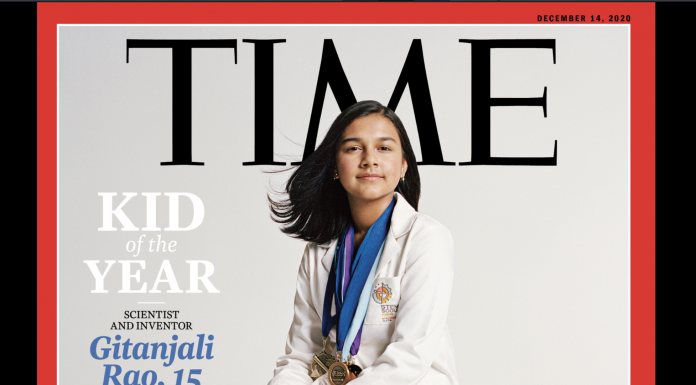 NPR – Gitanjali Rao, a Colorado teenager who invented a mobile device to test for lead in drinking water, is Time’s Kid of the Year for 2020.

The magazine announced the award Thursday, citing Rao’s ability to apply scientific ideas to real-world problems — and her desire to motivate other kids to take up their own causes.

It’s just the latest recognition for Rao, 15, who was named last year to the Forbes 30 Under 30 list.

She won praise in 2017 [when she was just 11] after she responded to the Flint, Mich., water crisis by creating a device named Tehys, using carbon nanotube sensors to detect lead in water.

The Lone Tree, Colo., native was named America’s Top Young Scientist when she was in the seventh grade. She went on to collaborate with scientists in the water industry to try to get the device on the market.

“You type in a word or phrase, and it’s able to pick it up if it’s bullying, and it gives you the option to edit it or send it the way it is.

“The goal is not to punish. As a teenager, I know teenagers tend to lash out sometimes. Instead, it gives you the chance to rethink what you’re saying so that you know what to do next time around.”

The debut Kid of the Year award comes from a partnership between Time and Nickelodeon. Rao was chosen in part because of the way she has followed up her technical work with efforts to get other young people to work on solving the problems they see … Read more.