0 For 12,000: Religious Exemptions Are DOA In US Military 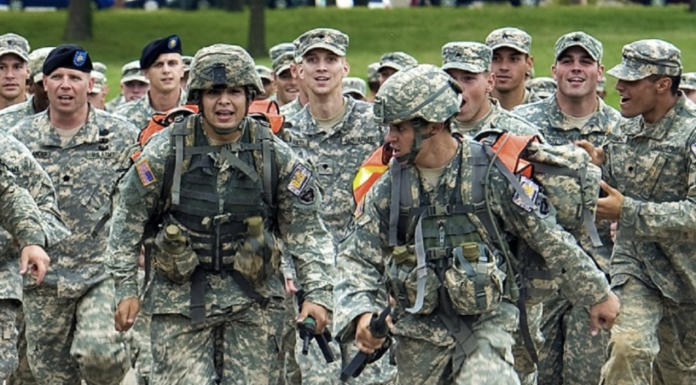 WASHINGTON (AP) — More than 12,000 military service members refusing the COVID-19 vaccine are seeking religious exemptions, and so far they are having zero success.

That total lack of approvals is creating new tensions within the military, even as the vast majority of the armed forces have gotten vaccinated.

The services, urgently trying to keep the coronavirus pandemic in check by getting troops vaccinated, are now besieged with exemption requests they are unlikely to approve.

Meanwhile, troops claiming religious reasons for avoiding the shots are perplexed because exemptions are theoretically available, yet seem impossible to obtain.

Caught in the middle are chaplains, who must balance the desire to offer compassionate care and guidance to personnel with the need to explain a complicated process that may well be futile.

They also must assess requests from those who may be using religion as an excuse to avoid a vaccine that, while credited with preventing needless deaths, has become politically charged.

“So many of them come in thinking that I make the decision, and if they make this case, that it’s a done deal,” said Maj. A’Shellarien Lang, an Army chaplain for the National Guard.

“I don’t make the decision. And so when they find that out, it’s a kind of game-changer in the sense that they know that the process has to continue.”

According to the services, at least 30,000 service members are not yet vaccinated, but several thousand of those have gotten temporary or permanent medical or administrative exemptions approved.

Of the remaining — which is likely 20,000 or more — thousands are working their way through the exemptions process, such as for religious reasons, or have flatly refused. That’s about 1.5% of the roughly 1.3 million active duty troops.

Obtaining a religious exemption is rooted in a process that predates the pandemic and has been used for decisions such as whether troops on duty can wear head coverings or beards for religious reasons.

In addition to discussions with chaplains to determine whether they have a “sincerely held belief,” troops must meet with commanders and medical personnel.

The final decision is made higher up the chain of command and is also based on whether the person’s vaccine exemption will pose a risk to mission accomplishment, unit cohesion, the health and safety of the force, and military readiness.

Even in the past, few troops have cleared those hurdles to get religious exemptions. And because the pandemic can directly affect the force’s health and readiness, the bar is even higher, so military leaders aren’t surprised by the lack of approved exemptions.

But for the troops and chaplains, it’s been a bit overwhelming.

“It’s just been a lot of interviews, a lot of memos,” Lang said. “I find that my colleagues are stressed just because of the logistics of getting the memo done and having to make sure they’re keeping up with the process. It’s like rapid fire.”

Air Force officials initially said religious exemption requests would be answered in 30 days. But they have gotten more than 4,700 requests — far more than the other military services, and the logistics of the lengthy review process has made it difficult to meet that timeline.

The Navy has received about 2,700 religious exemption requests, the Marine Corps has 3,100 and the Army about 1,700. Some that were rejected have been appealed, but there is little data on that.

“We did not expect the surge of requests,” said Air Force Col. Paul Sutter, chief chaplain for religious affairs at Space Force, which is included in the Air Force.

An Air Force reservist who requested a religious exemption said she’s aware of none approved so far, and she is not optimistic. The reservist, who asked that her name be withheld for privacy reasons, said her chaplain was very straightforward, laying out the process and noting the lack of approvals.

Still, she said, she believes “God has a plan for my life.”

Sutter and Col. Larry Bazer, deputy director of the National Guard’s joint chaplain office, said they tell their chaplains to be impartial as they speak with service members and to follow the process.

“Meet the member where they are. Let them articulate who they are, how they believe and how they live out that faith,” Sutter said he advises chaplains. “We’re just looking for their articulation of their deeply held beliefs. You’re looking for a consistency in how they adhere to those beliefs.”

Lang, who has done more than 50 interviews, said a key question she asks is what service members plan to do if their request is denied — a possibility some don’t expect.

She said some troops believe God doesn’t want them vaccinated and are torn by what they see as a contradiction if God somehow doesn’t ensure they get the exemption.

“If in their heart and their mind, they say this is God’s will for my life, and if the answer is no, it’s going to shatter that faith because there’s no balance. There’s no room for God to say no,” she said. “When I create the space to say what if God says no, then that opens up another whole level of faith conversation.”

The Air Force reservist who spoke on condition of anonymity said she was raised a Christian and is willing to retire if her request isn’t granted, even though it would mean giving up her G.I. Bill tuition benefits that she would get if she stayed another year or more.

“I will have to forfeit that,” said the mother of three children, including a newborn. Forgoing the tuition benefit, which she could transfer to her children, is worth it, she said. “I have no doubt God will provide for me.”

The reservist, whose husband is in the Army and is vaccinated, was pregnant when the vaccine came out, and she was concerned about a possible reaction. Health officials have asserted it is safe for pregnant women, but in some cases the military has granted temporary exemptions to women.

The reservist said her opposition is rooted in her faith, including concerns that some vaccines were tested on fetal cell lines developed over decades. The vaccines don’t contain fetal material.

The Vatican has deemed it “morally acceptable” for Catholics to get the shot and other Christian faiths have done the same. But some religious leaders have offered exemption letter templates and voiced support for vaccine avoidance.

“I don’t really dig into how long they’ve been in church and all of that kind of stuff because it’s really about their current reality of what they really believe,” Lang said. “And in that moment — let’s suppose it’s a political decision, but they wrap it in religiosity — that’s still what they believe in that moment.”

The chaplains said the interviews have had the side benefit of making troops more aware that religious personnel are available and that the meetings are triggering longer conversations about other issues.

“It’s really been a bridge to just some greater ministry,” Lang said.

Chaplains also are reaching out to each other for support. The past two years have been challenging for them as they worked with troops facing a wide range of struggles — from COVID-19 losses, job pressures, racial unrest and protests, and deployments.

“It really has been a major stress on our chaplain corps – just to be there as their chaplain,” said Bazer, a rabbi. “Overall folks are good, but folks are tired. I think our faith gives us that extra strength to keep us going — it’s that spiritual adrenaline push.”