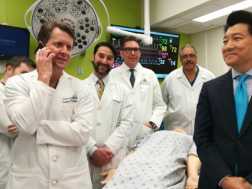 (AFP) Doctors at Johns Hopkins University said Monday they have performed the world’s first total penis and scrotum transplant on a US military serviceman who was wounded in Afghanistan.

The 14-hour operation took place on March 26, and was performed by a team of nine plastic surgeons and two urologic surgeons.

“We are optimistic that he will regain near-normal urinary and sexual functions following a full recovery,” W.P. Andrew Lee, professor and director of plastic and reconstructive surgery at the Johns Hopkins University School of Medicine, told reporters on a conference call.

The patient was severely injured by a blast from an improvised explosive device in Afghanistan several years ago, Lee said.

The entire penis, scrotum without testicles and partial abdominal wall came from a deceased donor.

“It’s a real mind-boggling injury to suffer; it is not an easy one to accept,” said a statement from the recipient, who asked to remain anonymous.

“When I first woke up, I felt finally more normal.”

He is now up and walking around, and is expected to be released from hospital this week.

The man lost his testicles in the explosion and did not get them restored as part of his transplant.

“The testicles were not transplanted because we had made a decision early in the program to not transplant germline tissue, that is to say not transplant tissue that generates sperm because this would raise a number of ethical questions,” said JHU plastic surgeon Damon Cooney.

“And we just felt there were too many unanswered ethical questions with that.”

Doctors said they are hopeful he will be able to urinate with his penis in the coming weeks, and that he will eventually regain enough sensation to achieve an erection.

The patient retained his prostate gland in the blast, but since he lost his testicles, he will not be able to ejaculate.

The extent of his sexual function will not be known for about six months, doctors said.

The first penis transplant in the world took place in China in 2006, but it was later removed due to “a severe psychological problem of the recipient and his wife,” doctors said.

Only four penis transplants have ever been done successfully, including the one announced Monday, doctors said.

Two have been done in South Africa, the nation that achieved the first such successful surgery in 2015. The United States performed its first successful penis transplant in 2016. Reprinted with permission of AFP via LibertyHeadlines.com.

Geo. H.W. Bush in Critical Condition; Couples Who Died Within Hours of Each Other

Why We Are NEVER Having a Colonoscopy