Queen Elizabeth II has expressed a message of condolences to the Bush family.

In a statement released by the British Ambassador, Her Royal Majesty note that Mrs. Bush will be “remembered for her care and compassion for her fellow Americans, for her unfailing efforts to promote literacy, and for her devotion to her family. A great orator, widely admired and dedicated to public service, she will be dearly missed.”

(Headline Health) When former First Lady Barbara Bush passed away this week at age 92, most Americans were surprised to learn just how many grandchildren and great-grandchildren the beloved Bush family matriarch actually had. According to an official statement from the Bush family office:

Seventeen grandchildren plus seven great-grandchildren – two dozen in all. The gracious former First Lady will surely be missed.

In her final days, Bush’s end-of-life decision kicked off a debate over ‘comfort care’

Former First Lady Barbara Bush has died. She was 92. Her legacy includes launching a national discussion on end-of-life decisions.

When is it time to say ‘enough’ to medical care and spend one’s final days and hours as naturally and comfortably as possible?

While Mrs. Bush has passed, the discussion she started continues for the benefit of others who will face the same challenges.

Our recent coverage continues below …

(Kaiser Health News) As she nears death at age 92, former first lady Barbara Bush’s announcement that she is seeking “comfort care” is shining a light — and stirring debate — on what it means to stop trying to fight terminal illness.

In a public statement Sunday, the family announced she has decided “not to seek additional medical treatment and will focus on comfort care.” [Full statement below.] 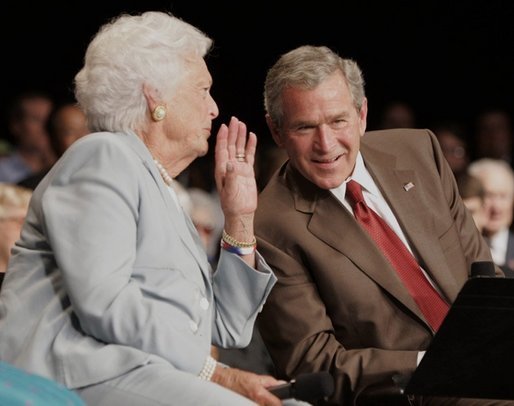 The announcement comes amid a national effort to define and document patients’ wishes, and consider alternatives, before they are placed on what has been described as a “conveyor belt” of costly medical interventions aimed at prolonging life.

Ellen Goodman, co-founder of the Conversation Project, which encourages families to discuss and document their end-of-life preferences, applauded the Bush family announcement.

“It sounds like this forthright, outspoken woman has made her wishes known and the family is standing by her,” Goodman said.

“It makes perfectly good sense at her age, with her failing health, that she would say at some point, ‘Life’s been good, and while you always want more, it’s enough,’” said Dr. Joanne Lynn, director of the program to improve elder care at Altarum Institute.

Lynn worked with Barbara Bush years ago, when she was a congressional spouse volunteering at the Washington Home for chronically ill patients. Bush helped with the founding of the hospice program there.

“We have so few examples in visible leadership positions” of public figures promoting palliative care, she said. [Coverage continues below … ]

Thousands were expected to focus on their end-of-life preferences Monday, which has been designated as National Health Care Decisions Day since 2008.

Dr. Haider Warraich, a fellow in cardiovascular medicine at Duke University Medical Center and author of the book “Modern Death,” also applauded the Bush family for putting the phrase “comfort care” into the public sphere so that other people can consider it “a viable option at the end of life.”

IN CASE YOU MISSED IT: Jim Kelly Out Of Intensive Care

But he said the family statement also creates confusion about the meaning of “comfort care,” by suggesting that it entails stopping medical treatment. On twitter, palliative care experts vigorously refuted that mischaracterization.

“Comfort care” usually refers to palliative care, which focuses on managing patients’ symptoms to keep them comfortable and retain their dignity, Warraich said.

“One of the common myths about palliative care is that they are being denied medical help,” Warraich said.

For heart failure patients, he said, “comfort care” usually means opting not to use a breathing machine or CPR. But patients do continue to receive medical treatment, including morphine to ease shortness of breath, and diuretics to remove excess fluid from their lungs, he said.

Heart failure patients, he said, often receive “escalating medical treatments until days before the end of life.” Their transition to comfort care can be abrupt, “like falling off a cliff,” he said.

“By bringing this into the sphere of discussion,” Warraich said, “we can start thinking about comfort and palliation long before they are in the clutches of death.”

Kaiser Health News is a nonprofit news service covering health issues. It is an editorially independent program of the Kaiser Family Foundation, which is not affiliated with Kaiser Permanente. CC BY-NC-ND 4.0. KHN’s coverage of end-of-life and serious illness issues is supported in part by the Gordon and Betty Moore Foundation. Featured image: PBS News Hour/YouTube

She is being cared for at her home in Houston and has decided not to go back into the hospital and will instead focus on “comfort care.”

“It will not surprise those who know her that Barbara Bush has been a rock in the face of her failing health, worrying not for herself — thanks to her abiding faith — but for others. She is surrounded by a family she adores, and appreciates the many kind messages and especially the prayers she is receiving,” the statement continued.

At 92 years old, Bush has been suffering for some time with Chronic Obstructive Pulmonary Disease, or COPD, and congestive heart failure.

Most recently, she was admitted to Houston Methodist Hospital on Good Friday suffering from shortness of breath. She was doing better and had been released earlier this past week, but started to get worse in the past couple of days. The Bushes have been married for 73 years. Bush is the only living wife of one former President and the mother of another former President. Read more at CNN.

VIDEO: Doctors told him to put his wife in a nursing home and be done with it. But he had taken a vow …

Tubes called airways carry air into and out of your lungs. If you have COPD, these airways may become partly blocked from swelling or mucus. This makes it hard to breathe.

At the end of the airways are many tiny air sacs. They’re like little balloons that inflate and deflate when you breathe in and out. With COPD, these sacs become less flexible. This can cause small airways to cave in. It can also make it harder for you to breathe.

Cigarette smoking is the biggest cause. If you hang around other smokers a lot, that can play a role, too. You might also develop this condition if you’ve been exposed to things like dust, air pollution, or certain chemicals for long periods of time.

In rare cases, your genes may put you at risk for COPD. People who lack a protein called alpha 1 antitrypsin (AAT) may be more likely to develop it. If they smoke and have COPD, it tends to get worse faster.

What Are the Symptoms?

These are the most common signs of COPD:

How Do I Know If I Have It?

Your doctor will ask about your symptoms and medical history. He’ll also do a physical exam and conduct breathing tests. Read more at WebMD.

5 “Healthy” Foods That Are Anything But