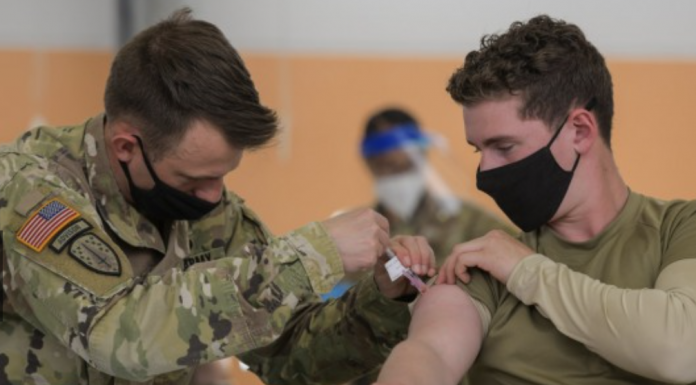 MSN – Troops at an Alabama military base have been ordered to show proof that they’ve been vaccinated to be able to go without face masks on the premise.

The base in Fort Rucker, Alabama, the headquarters for the Army’s aviation program, announced on Tuesday that it would be implementing the new rule in an effort to combat a rising number of COVID-19 cases in the state.

State Health Officer Scott Harris told The Associated Press in an interview that he was concerned about the rising number of COVID-19 cases and said that the delta variant was playing “a large role.”

According to the state’s coronavirus data, Alabama has seen over 556,000 cases of COVID-19 and over 11,400, as of Wednesday evening, since the start of the pandemic.

Johns Hopkins data shows that Mississippi has the same percentage as Alabama of people are fully vaccinated … READ MORE.

Panetta calls on Biden to mandate COVID-19 vaccines for military

THE HILL – Former Defense Secretary Leon Panetta said that President Biden should require all military members to get the COVID-19 vaccine.

In an interview with Greta Van Susteren set to air on Sunday, Panetta said it was a matter of “national security.”

Panetta, who served under the Obama administration, said:

“I frankly think the president ought to issue an order requiring everybody in the military to get a COVID-19 shot, period. That’s an issue involving our national security.

“The last damn thing you need is to have those in the military that are our warriors unable to respond to a mission because they’ve gotten COVID-19. There’s no excuse for that.

“When I was in the Army, I got every shot required by the military, shots in both arms as well as everywhere else. There is no reason we should not require a COVID-19 shot for everyone in the military, period.”

More than half of all service members are at least partially vaccinated as of late June.

The Navy reported a 77 percent vaccination rate for active-duty sailors, while 70 percent of troops in the Army are vaccinated, as are 61 percent in the Air Force and 58 percent in the Marine Corps.

However, thousands of military members have still not gotten the vaccine.

The vaccines are under an emergency use authorization by the Food and Drug Administration (FDA). Therefore, the Pentagon cannot legally require that all military members get the vaccine, although Biden could grant an exception to this rule. Read more.