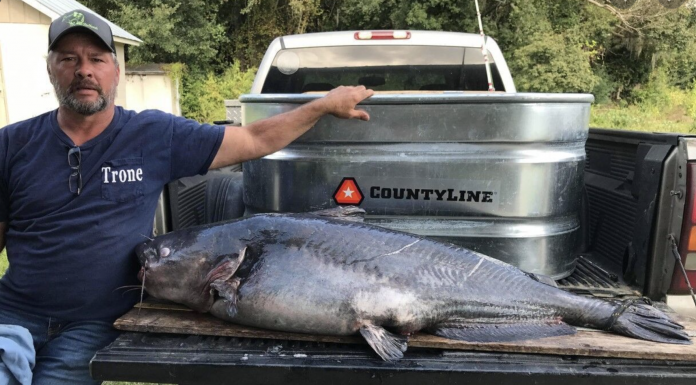 PLUS: Is wild-caught catfish safe to eat?

A Florida man set a new state record in Georgia after reeling in a massive Blue Catfish on the Chattahoochee River.

The post shows several photos of Trone with his catch, including one where he’s holding the massive fish in both of his arms.

“Holding that fish in my arms was hell. It took 3 of us to get that fish in that position. I only held it for a few seconds. About killed my back … ”

Where Prostitutes Get Paid In Fish

US Farmers Take On Fake “Made In USA” Labels

Feds Powerless To Keep Illegal Asian Catfish Out Of U.S.

Is wild-caught catfish safe to eat?

Livestrong – If you’re wondering whether you can eat catfish, you probably were not raised in the South. Catfish, usually fried, is a common dish in restaurants and homes in the Southern states, particularly in rural areas.

Catfish is becoming more widely popular as a delicious source of protein that is low-fat and low-calorie, especially when fixed in ways other than frying.

Before eating fresh-caught catfish, check with your local extension office regarding the waters where the fish was caught. Many toxic chemicals, such as PCBs, dioxins and mercury, leach into waterways and build up in fish.

Nearly all fish contain some mercury, but according to the Environmental Protection Agency, catfish is one of the five most commonly eaten fish that are low in mercury. Most people can tolerate small amounts of mercury, but children, pregnant women or nursing mothers should restrict consumption of low-mercury fish to no more than two meals per week … Read more.